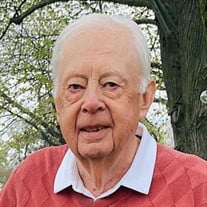 NORFOLK -- Funeral service for Marlin Winter, 83, of Norfolk will be held at 10:30 a.m., Wednesday, December 8, 2021 at the St. Paul's Lutheran Church in Norfolk. Rev. Paul Hirsch will be officiating the service. Interment will be at the St. Paul's Lutheran Cemetery, Norfolk. Visitation will be 4:00-7:00 p.m., Tuesday, at the Stonacek Funeral Chapel in Norfolk. Marlin passed peacefully on Wednesday, December 1, 2021 at the Faith Regional Hospital in Norfolk. Stonacek Funeral Chapel is in charge of the arrangements. Marlin Winter was born on July 17, 1938, in Norfolk to Arnold and Myrtle (Kruse) Winter. He was the oldest of four siblings and attended elementary school at St. Paul’s Lutheran School. He then attended Norfolk Senior High School, where his lifelong love of the Norfolk Panthers began. On March 1, 1959, he married JoAnn (Seegebarth). They were blessed with a daughter, Kelly. Marlin spent the majority of his working years selling insurance; first for Farm Bureau and then opening Winter Insurance Agency. Through Winter Insurance Agency, Marlin created hundreds of wonderful relationships in the area and enjoyed working alongside both his wife and daughter. Marlin’s favorite days were spent outdoors hunting, fishing, and playing golf with his friends and family. He was also an avid sports fan, and his grandson joked that the world has lost the last true Husker Football fan. Marlin loved the Lord and his family and will be deeply missed by many. Marlin is survived by his wife of 63 years, JoAnn Winter of Norfolk; daughter Kelly (Rick) Meysenburg of Norfolk; three grandchildren, Luke Kruse of Norfolk, Zach (Cierra) Kruse of Norfolk, and Molly Meysenburg of Norfolk; three great-grandchildren, Reece, Beckham, and Macklin Kruse; siblings Valere Winter of Norfolk, Keith (Sylvia) Winter of Wahoo, and Veryle Winter of Norfolk; and many nieces and nephews. Marlin was preceded in death by his parents Arnold and Myrtle. Casket bearers will be Luke Kruse, Zach Kruse, Cierra Kruse, Rick Meysenburg, Molly Meysenburg, and Keith Winter. Condolences may be expressed to the family on-line at www.stonacekfuneralchapel.com.

NORFOLK -- Funeral service for Marlin Winter, 83, of Norfolk will be held at 10:30 a.m., Wednesday, December 8, 2021 at the St. Paul's Lutheran Church in Norfolk. Rev. Paul Hirsch will be officiating the service. Interment will be at the St.... View Obituary & Service Information

The family of Marlin Winter created this Life Tributes page to make it easy to share your memories.

Send flowers to the Winter family.