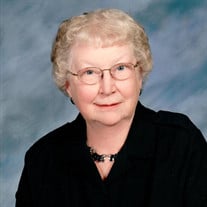 NORFOLK -- Private family funeral service for M. Lavon Blunck, 86, of Norfolk formerly of Osmond will be held at 10:30 a.m., Monday, November 30, 2020 at Stonacek Funeral Chapel in Norfolk. The funeral service will be live-streamed on the Stonacek Funeral Chapel Facebook page. Officiating the service will be Rev. Rodgers Chishiba. Interment will take place at Hillcrest Memorial Park Cemetery, Norfolk. Public visitation will be held from 4:00 - 7:00 p.m., Sunday, at Stonacek Funeral Chapel in Norfolk. Masks and social distancing are required. Lavon passed away Tuesday, November 24, 2020 at the Colonial Manor in Randolph. Stonacek Funeral Chapel in Norfolk is in charge of the arrangements. Lavon was born Aug. 3, 1934, to Meldy and Marie (Petersen) Petersen in Plainview. She graduated from Plainview High School in 1952. She married Kenneth A. Blunck on Aug. 9, 1953, at Zion Lutheran Church in Plainview. After their marriage, the couple farmed northeast of Osmond for 36 years. The couple moved to Norfolk in 1989. Martha was a housewife and homemaker and also worked eight years at the Osmond Republican and also 13 years for Dr. David Johnson as a receptionist and book keeper. She enjoyed reading, card clubs and going to dances. She was a member of the First United Methodist Church in Norfolk. She is survived by two sons, Roger (Patricia) Blunck of Osmond and Dan Blunck of Norfolk; two daughters, Diane (Myron) Zechmann of Elm Creek and Sharon (Jeff) Koepke of Lincoln; nine grandchildren and nine great-grandchildren; brothers-in-law and sister-in-law Wayne (Charlotte) Blunck of Osmond and Dale Blunck of Osmond. She was preceded in death by husband Kenneth in 2003, and parents Meldy and Marie. Recorded music for the service will be “The Old Rugged Cross,” “How Great Thou Art” and “What A Friend We Have In Jesus.” Casketbearers will be Ben Zechmann, Mike Zechmann, Matt Blunck, Jayden Blunck, David Blunck and Owen Koepke. Condolences may be expressed to the family online at www.stonacekfuneralchapel.com.

NORFOLK -- Private family funeral service for M. Lavon Blunck, 86, of Norfolk formerly of Osmond will be held at 10:30 a.m., Monday, November 30, 2020 at Stonacek Funeral Chapel in Norfolk. The funeral service will be live-streamed on the Stonacek... View Obituary & Service Information

The family of Martha "Lavon" Blunck created this Life Tributes page to make it easy to share your memories.

Send flowers to the Blunck family.