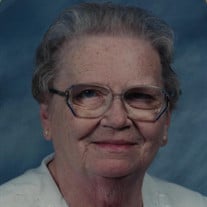 PIERCE -- Funeral service for Marvelyne Fuerhoff, 90, of Pierce will be held at 10:30 a.m., Saturday, April 6, 2019 at the St. Joseph's Catholic Church in Pierce with Father Jerry Connelly officiating. Interment will be at the St. Joseph's parish cemetery, rural Pierce. Visitation will be held 4:00-7:00 p.m., Friday, April 5, also at the St. Joseph's Catholic Church with the rosary service beginning at 7:00 p.m. Marvelyne died Monday, April 1, 2019 at the Plainview Manor. Stonacek Memorial Chapel in Pierce is in charge of the arrangements. Marvelyne Z. Fuerhoff of Pierce was born April 5, 1928, to William and Margaret (Noerenberg) Koehler. She was baptized on April 5, 1928, on the Koehler family farm north of Pierce because of health reasons. Marvelyne, at age 5, moved to a farm southwest of Pierce. She attended School District 36 and graduated from Pierce High School in May 1945. She taught country school for four years. Marvelyne married Ervin Fuerhoff on July 9, 1950, in Osmond. She was a mother of seven children: six boys and a girl. They farmed near Osmond for five years. They moved to Pierce in June 1955. She worked at the Pierce Manor for four years and Dale Electronics for 21 years. She volunteered at Faith Regional Health Services and Pierce Manor. As a member of St. Joseph’s Catholic Church in Pierce, Marvelyne taught Sunday school and CCD classes for 23 years and was a member of the altar society. She is survived by her children, Gary (Judy) Fuerhoff of Pierce, Randy (Judy) Fuerhoff of Oakland, Larry Fuerhoff of Pierce, Dan (Pam) Fuerhoff of Norfolk, Bob (Mary Lou) Fuerhoff of Pierce, Pat (Don) Reding of Lincoln and Rick Fuerhoff of Pierce; 18 grandchildren; 22 great-grandchildren; four step great-grandchildren; two brothers, Kenneth Koehler of Grapeland, Texas, and Darrel and spouse Marge Koehler of Pierce; a sister-in-law, Faye Koehler of Pierce; a stepsister, Claryce Ott of Phoenix, Ariz.; and several nieces, nephews and cousins. She was preceded in death by her parents, William and Margaret; her stepmother, Lillian Koehler; her spouse, Ervin, who died in 1979; two sisters, Merna Edwards and Geraldine Schulz; a brother, Galen Koehler; two stepbrothers, Duane Synovec and Alan Ott; three brothers-in-law; and two sisters-in-law. Marvelyne enjoyed making quilts for each grandchild, watching sports, especially events in which children, grandchildren and great-grandchildren were involved in, and reading. She was a great fan of the Nebraska Cornhuskers, Pierce Bluejays and the Atlanta Braves. She lived in Pierce County all her life. Casket bearers will be Nate Fuerhoff, Ryan Fuerhoff, Anthony Fuerhoff, Brian Fuerhoff, Nick Koehler and Tim Edwards. Online condolences may be sent to www.stonacekfuneralchapel.com.

PIERCE -- Funeral service for Marvelyne Fuerhoff, 90, of Pierce will be held at 10:30 a.m., Saturday, April 6, 2019 at the St. Joseph's Catholic Church in Pierce with Father Jerry Connelly officiating. Interment will be at the St. Joseph's parish... View Obituary & Service Information

The family of Marvelyne Z. Fuerhoff created this Life Tributes page to make it easy to share your memories.

Send flowers to the Fuerhoff family.