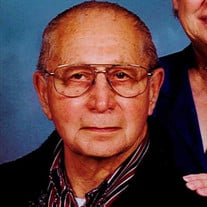 NORFOLK -- Memorial service for Marvin R. Pospisil, 91, of Norfolk will be held at 1:30 p.m., Saturday, March 12, 2022 at the Stonacek Funeral Chapel in Norfolk. Rev. Chris Asbury will be officiating the service. Inurnment will be held at the Stanton City Cemetery, Stanton. Military rites will be conducted by the V.F.W. Post #3602 and American Legion Post #88, both of Stanton, American Legion Riders, and the United States Air Force Honors Guard. A visitation will begin one hour prior to the service on Saturday. Marvin passed away on Sunday, February 6, 2022 at the Madison House in Norfolk. Stonacek Funeral Chapel is in charge of the arrangements. Marvin was born on September 1, 1930 in Wausa, Nebraska to parents Emil and Pearl (Rinehart) Pospisil. He was baptized in the Methodist Church, and later confirmed in the Lutheran church. He served in the United States Air Force from December 26, 1950 to December 13, 1954. He married Shirley Anne Carstens on May 1, 1955 at Mt. Olive Lutheran Church, Norfolk. He was a member of Grace Lutheran Church, Norfolk. After marriage, Shirley and Marvin lived in Norfolk for a short while. They then moved to Mason City, IA for Marvin’s work. Marvin worked for the U.S. Postal service. In 1960 Marvin transferred to be a U.S.D.A. meat inspector. Marvin completed over 30 years of government service. He retired in 1987. The family lived in Mason City many years until they moved to Sioux City, IA, then back to Norfolk, Nebraska. Survivors include his daughter Cynthia (Mike) Herbolsheimer of Stanton, daughter Linda (Jay) Westerhold of Cheyenne, WY, son Steven Pospisil of Norfolk, 4 grandchildren, 4 great-grandchildren. He was preceded in death by his spouse Shirley in 2020, parents Emil and Pearl, daughter Cheryl Pospisil, and a brother Melvin, sister Mary Ann Organist will be Emily Carlson. Honorary casket bearers will be Bradley Herbolsheimer, Travis Herbolsheimer, Amber Kuntz, and Adam Westerhold. Condolences may be expressed to the family on-line at www.stonacekfuneralchapel.com.

NORFOLK -- Memorial service for Marvin R. Pospisil, 91, of Norfolk will be held at 1:30 p.m., Saturday, March 12, 2022 at the Stonacek Funeral Chapel in Norfolk. Rev. Chris Asbury will be officiating the service. Inurnment will be held at the... View Obituary & Service Information

The family of Marvin R. Pospisil created this Life Tributes page to make it easy to share your memories.

Send flowers to the Pospisil family.