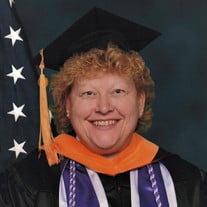 NORFOLK – Funeral service for Mary Ann Andersen, 59, of Norfolk will be held at 10:30 a.m., Wednesday, February 16, 2022 at the St. John’s Lutheran Church in Norfolk. Rev. Randy Rasmussen will be officiating the service. Interment will be at the Prospect Hill Cemetery, Norfolk. Visitation will be 4:00-7:00 p.m., Tuesday, February 15, also at the church. Mary died Thursday, February 3, 2022, at St. Joseph’s Rehabilitation and Care Center in Norfolk after a short but hard-fought battle with pancreatic cancer. The Nebraska Nurse Honor Guard will present a tribute to Mary at the funeral. Stonacek Funeral Chapel is in charge of the arrangements. Mary was born on January 11, 1963, the youngest child of Cliff and Violet (Landburg) Milander. She was raised on a farm north of Coleridge and attended Coleridge Community Schools, graduating in 1981. While in high school, she started working at Park View Haven nursing home in Coleridge, a job that would lead to a lifetime nursing career. After graduation from high school, she attended St. Luke’s School of Nursing in Sioux City. She graduated from St. Luke’s in May of 1984 and started working at the Norfolk Regional Center as an RN. Even though she had started her nursing career, Mary was a lifelong learner. She continued her nursing education while working full time, completing her Bachelors, then her Masters and eventually her APRN from University of Nebraska Med Center. She worked at the Norfolk Regional Center for 29 years, when she left she was the nurse supervisor on the 1W ward. While working for the Regional Center, she also worked as an Adjunct instructor for NECC, guiding nursing students through their psych rotation. In 2013, she left the Regional Center and started her career as a nursing instructor at UNMC CON Northern Division on the NECC campus. Mary also worked as an APRN for Oasis Counseling beginning in 2017. Mary loved nursing and teaching the next generation of nurses. Mary and Kevin Andersen were married on May 24, 1986 at Immanuel Lutheran Church in Coleridge and they made their home in Hadar. Mary and Kevin were made for each other, and they celebrated 35 happy years of marriage together. They spent a great deal of time traveling to many sporting events, especially Husker football and volleyball games. They also spent a great amount of time attending their great-nieces and great-nephews activities–she loved watching any activity they were involved in, whether it be sports or the fine arts, you could find Mary and Kevin there cheering them on. They took many trips together, including the Rose Bowl to see the National Championship game in 2002, and to Washington DC in 2010 to take Kevin’s mom and dad to see the WWII Memorial and Arlington National Cemetery. Mary was a member of St. John’s Lutheran Church in Norfolk, The American Nurses Association, Sigma Theta Tau International, American Psychiatric Nurse Association, and the American Association of Nurse Practitioners. Mary is survived by her husband, Kevin, her mother-in-law Betty Andersen, sister-in-laws and brothers-in-law Lois Milander, Betty Jo Deck, Linda (David)Kohl, Howard (Becky) Allvin and Gary (Carla) Andersen; several nieces and nephews and many great nieces and nephews and great great nieces and nephews. Mary was preceded in death by her parents, her brother, Wendell, her brother and sister-in-law William and Florene Milander, her father-in-law, Marvin Andersen, a niece, Vicky Kennedy and a nephew Christopher Andersen. The Nebraska Nurse Honor Guard will present a tribute to Mary at the funeral. Condolences may be expressed to the family on-line at www.stonacekfuneralchapel.com.

The family of Mary Ann Andersen created this Life Tributes page to make it easy to share your memories.

Send flowers to the Andersen family.