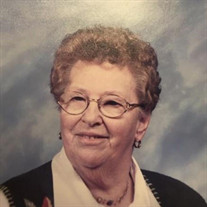 .PIERCE — Public graveside service for Mary E. Blank, 85, Pierce, will be at 10 a.m. Monday, June 8, at the Prospect View Cemetery in Pierce. Jacquie Samway will officiate. Public visitation without the family present will be 5-7 p.m. Sunday at the United Church of Christ in Pierce. She died Friday, June 5, 2020, at her residence in Pierce. 1935-2020 Born April 12, 1935, in Pierce, Mary was the daughter of Anton and Gwen (Wickizer) Synovec. She was baptized on Aug. 24, 1941, and later confirmed, both at the United Church of Christ in Pierce. Mary grew up in rural Pierce and attended Pierce High School to the 11th grade. On July 18, 1952, she married Melvin Blank at the United Church of Christ in Pierce. The couple lived in Pierce. Mary worked at the hospital in Norfolk for five years and Lynn and Sons grocery store in Norfolk for 10 years. Mary loved gardening, dancing, camping, fishing, and, most of all, baking for her family. Her coconut cream pies, chocolate cake and cinnamon rolls were always a big hit at the family celebrations. She was a very hard-working woman who had many jobs over the years, but her favorite job was taking care of her family, especially her grandchildren. Mary lost the love of her life, Melvin, tragically on April 18, 1995. But the last 20-some years, she’s been blessed to have her second love and companion, Elwin Morrill of Pierce, at her side, caring for her until her death. You always knew where you stood with Mary; she told you exactly how she felt, and she had a heart of gold which would melt with every visit from her little great grandchildren. Over the years, she was known for her Easter scavenger hunts and spoiling everyone at Christmas. In the summer of 2017, she enjoyed a vacation with her family to the Black Hills; it would be her last time she traveled. What a blessing it was. Mom was a giver. Survivors include four sons, Mike (Beverly) Blank of Norfolk, Steve (Linda) Blank of Pierce, Mark (Debra) Blank of Hadar and Roger (Trish) Blank of Pierce; 12 grandchildren; 15 great-grandchildren; her dear friend and companion, Elwin Morrill of Pierce; her siblings, Betty Leisner of Pierce, Jim Synovec of Pierce and Carol (Darrell) Nyhoff of Hickman; and a sister-in-law, Beth Synovec of Norfolk, She was preceded in death by her parents, Anton and Gwen; her spouse, Melvin Blank; her brothers, Tony Synovec and Tommy Synovec; and a sister in infancy. Services will be livestreamed on Stonacek Funeral Chapel’s Facebook page. Those coming to the graveside services are encouraged to bring your lawn chairs to the cemetery. Recorded hymns for the service will be “Softly and Tenderly,” “In The Garden,” “Rock Of Ages,” “Be Not Dismayed” and “On The Wings Of A Snow White Dove.” Casket bearers will be Seth Blank, Brett Blank, Aaron Blank, Nicholas Blank, Travis Blank and Jon Leisner. Online condolences may be left at www.stonacekfuneralchapel.com.

.PIERCE &#8212; Public graveside service for Mary E. Blank, 85, Pierce, will be at 10 a.m. Monday, June 8, at the Prospect View Cemetery in Pierce. Jacquie Samway will officiate. Public visitation without the family present will be 5-7 p.m.... View Obituary & Service Information

The family of Mary E. Blank created this Life Tributes page to make it easy to share your memories.

Send flowers to the Blank family.