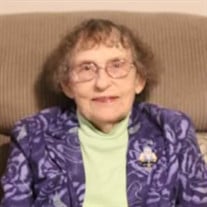 NORFOLK – Funeral service for Maudie A. Hess, 90, of Norfolk will be held at 10:30 a.m., Friday, August 6, 2021 at the Westridge United Methodist Church in Norfolk. Rev. Claire Gager will be officiating. Interment will be held at the Hillcrest Memorial Park Cemetery, Norfolk. Visitation will be 5:00-7:00 p.m., Thursday, at the Stonacek Funeral Chapel in Norfolk. Maudie passed away on Sunday, August 1, 2021 at The Meadows Assisted Living in Norfolk. The service and graveside service will be live-streamed on the Stonacek Funeral Chapel Facebook page. Stonacek Funeral Chapel in Norfolk is in charge of the arrangements. Maudie was the first born of twins to Gene and Edith (Drake) Slusher on August 2, 1930 in Jackson, Kentucky. Maudie and her identical twin sister, Mary, were always together day and night. When they turned 4 years old, the family moved to Detroit and spent their early education (K-3rd grade) there. They then moved to Cincinnati when from 4th grade through 8th grade during WWII. The family then moved back to Jackson, Kentucky and they lived next to and attended Jackson High School. Maudie and Mary enjoyed cheerleading throughout high school and they graduated from there. Their mother Edith was a church organist and at an early age both girls learned music along with help from their neighbors. Maudie continued her love for music by playing the piano, marimba, and the mountain dulcimer throughout her life and playing at the various church parishes that she belonged to and that her husband served at. After high school, the girls entered Good Samaritan School of Nursing on the University of Kentucky campus in Lexington, Kentucky. They enjoyed many activities and experiences there in nursing, church camping, athletics, friendships, and field hockey. In March, 1951, Maudie met and dated Dillon Hess who was from Nebraska and was currently in his 2nd year at the Asbury Seminary. On September 21, 1951, Maudie married Dillon Hess at the Epworth Methodist Church in Lexington, KY. They then honeymooned through the Smokey Mountains and Virginia Valley before traveling to Nebraska to be acquainted with Dillon’s family. Throughout her nursing career she worked as a school nurse, camp nurse, at hospitals, nursing homes and as a home health care nurse. She ended her nursing career as Director of Nurses at St. Joseph's Nursing Home. Maudie spent her life in service to others. She was a member of many community organizations and volunteered at the Agape Crisis Pregnancy Center. Maudie's hobbies included tatting, knitting and playing in the Strings & Whistles Band. She loved being a hostess to church meetings and family tea parties. She had a loving heart and was a blessing to everyone who knew her. Her faith was strong and she was a prayer warrior. Maudie loved her family dearly, enjoyed spending time with all of them and welcomed every new grand baby. Survivors include spouse Rev. Dillon Hess of Norfolk, son Terry (Laura) Hess of Stanton, daughter Sharon (Jeff) Schweer of Everett, WA, daughter Marsha (Grafton) of Shelbyville, TN, daughter-in-law Nellie Hess of Harlington, TX, 13 grandchildren, 8 great-grandchildren, and twin sister Mary (Ray) Rose of Lexington, KY. She was preceded in death by her parents, son Roy Hess, son-in-law Gary Grafton, granddaughter Jessica Grafton, and grandson Derek Hess. Casket bearers will be Dave Scarf, Bill Miller, Wayne Andreasen, Dennis Hoobler, Ron McKeever, and Mike Brockhaus. Honorary casket bearers will be Maudie’s grandchildren Erika Hess, Derek Hess, Erik Hess, Merry Hess, Keri Smith, Kory Hess, Kody Hess, Stefanie Schweer, Julia Schweer, Samantha Chester, Jessica Grafton, Alexis McKnight, Rachel Grafton, Joshua Grafton, and Tyler Grafton. Condolences may be expressed to the family on-line at www.stonacekfuneralchapel.com.

NORFOLK &#8211; Funeral service for Maudie A. Hess, 90, of Norfolk will be held at 10:30 a.m., Friday, August 6, 2021 at the Westridge United Methodist Church in Norfolk. Rev. Claire Gager will be officiating. Interment will be held at the Hillcrest... View Obituary & Service Information

The family of Maudie A. Hess created this Life Tributes page to make it easy to share your memories.

Send flowers to the Hess family.