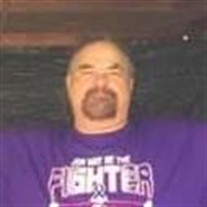 STANTON -- Memorial service for Michael D. Hart, 59, of Clarkson will be held at 11:00 a.m., Saturday, January 4, 2020 at the Faith Lutheran Church in Stanton with Rev. Tim Booth officiating. No burial will be held. Visitation will be 4:00-7:00 p.m., Friday, Jan. 3, also at the church in Stanton. Michael passed away from cancer at his residence surrounded by his family and puppies on Saturday, December 28, 2019 in Clarkson, Nebraska. Stonacek Funeral Chapel in Norfolk is in charge of the arrangements. Michael D. Hart was born March 29, 1960, in West Point, the son of Milford and Marlene (Koenig) Hart. He attended grade school in Beemer, graduated in 1978 from Beemer High School and then attended Northeast Community College in construction. After high school, Mike worked construction at Ortmeier Construction in Beemer. He then worked at Carpet Master for 18 years and then was the supervisor for the nursing home in Clarkson for five years. He then began working for Heaven’s Best Carpet Cleaning in Norfolk. He married Jennifer “Jenny” Houdek on June 8, 1996, at the Congregational Church in Stanton. Mike enjoyed football, his puppies, yard working, playing horse shoes and being outside. He also enjoyed coaching numerous sports for his children when they were growing up, such as basketball, football, baseball, girls’ softball and powerlifting. Survivors include his spouse, Jenny Hart of Clarkson; his children, Andy Hart of Lincoln, Michelle Hart of Des Moines, Iowa, Michael (Brooke) Hart of Clarkson, Zach Houdek of Norfolk, Ryan (Renae) Hart of Stanton, Jena Hart of Vermillion, S.D.; seven grandchildren, Paris, Lyrick, Devon, Cooper, Makayla, Remy and River; his great-grandson, Kaine; and his siblings, Patty Hart of Omaha, Jim Hart of Lincoln, Sandra (Frank) Peebles of Phoenix, Ariz., Jeff Hart of Lynch and Marsha Hart of Norfolk. He was preceded in death by his parents and a brother, David. Condolences may be expressed to the family online at www.stonacekfuneralchapel.com.

STANTON -- Memorial service for Michael D. Hart, 59, of Clarkson will be held at 11:00 a.m., Saturday, January 4, 2020 at the Faith Lutheran Church in Stanton with Rev. Tim Booth officiating. No burial will be held. Visitation will be 4:00-7:00... View Obituary & Service Information

The family of Michael D. Hart created this Life Tributes page to make it easy to share your memories.

Send flowers to the Hart family.