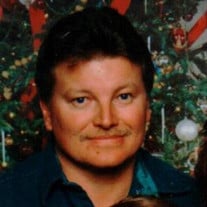 NORFOLK -- Memorial Service for Michael L. "Mike" Rossmeier, 61, of Norfolk, will be held at 10:30 a.m., Thursday, June 11, 2020 at Stonacek Funeral Chapel in Norfolk with Rev. Chris Asbury officiating the service. Private family burial will take place at a later date. Visitation will be held from 5:00 - 7:00 p.m., Wednesday also at Stonacek Funeral Chapel in Norfolk. Mike died Friday, June 5, 2020, at Faith Regional Health Services in Norfolk. Stonacek Funeral Chapel in Norfolk is in charge of the arrangements. Mike was born on December 9, 1958 in Norfolk, Nebraska to Gerald and Geraldine (Dinkel) Rossmeier. He was baptized and confirmed at the Immanuel Lutheran Church in Hadar. Mike attended grade school at District #6 country school, rural Pierce and then attended Immanuel Lutheran grade school in Hadar. He graduated from Pierce High School in 1976. After graduating from high school Mike went to work for Nucor Steel. Mike married Pat on July 3, 1992 in California before later divorcing; to this union they had one daughter Emily. Mike loved his family and enjoyed snowmobiling, hunting, and fishing in Montana, Alaska, and Wyoming. He also enjoyed staying at the cabin on the Missouri River. He was a member of Grace Lutheran Church, Norfolk. Mike is survived by his daughter Emily Rossmeier of Norfolk, former wife Pat Schnieder of Norfolk, mother Geraldine Rossmeier of Norfolk, sister Cindy (Kevin) Flesner of Pierce, and many nieces, nephews, and cousins. He was preceded in death by his father Gerald and brother Steven. Organist will be Emily Carlson, and the hymns will be "I'm But A Stranger Here" , "Abide With Me" , "On Eagle's Wings" , "Amazing Grace." Condolences may be expressed to the family on-line at www.stonacekfuneralchapel.com.

The family of Michael L. "Mike" Rossmeier created this Life Tributes page to make it easy to share your memories.

Send flowers to the Rossmeier family.