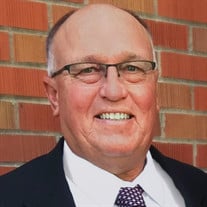 OSMOND — Private family services for Michael W. “Mike” Timmerman, 58, of Osmond will be held Thursday, April 16, at the Immanuel Lutheran Church in Osmond with the Rev. Glen Emery officiating. The service at the church will be streamed live at 10:00 a.m., Thursday on the Stonacek Funeral Chapel Facebook page. Graveside services will be held at 10:30 a.m. Thursday at the church cemetery with graveside rites by the Sons Of The American Legion Post #326, Osmond. Limited visitation without the family present will be held 5-7 p.m. Wednesday at the church. In compliance with COVID-19 restrictions there will be a strict enforcement of 10 people allowed inside the facility at one time and they may need to wait outside. Stonacek Memorial Chapel in Osmond is in charge of the arrangements. He died Friday, April 10, 2020, at Sacred Heart Hospital in Yankton. 1962-2020 Michael William Timmerman was born on April 3, 1962, to Howard and Sharon (Meier) Timmerman in Osmond. He attended grade school at Immanuel Lutheran School in Osmond and graduated from high school on May 18, 1980, from Osmond Community School in Osmond. In the summer of 1980, Mike began to work for Pierce County Department of Roads as a motor grader operator where he worked for 17 years. During this time he also farmed with his father and older brother Daniel Timmerman and raised hogs. He continued to farm with his dad and brother until 2019. Mike was going to begin farming with his son-in-law, Beau Simpson, in 2020 and was looking forward to working with him. On June 27, 1987, Michael married Jodi Gillilan at Thabor Lutheran Church in Wausa. To this union two daughters were born: Rachel Ann and Melissa Jean. Michael was baptized and confirmed a member of Immanuel Lutheran Church in Osmond, and continued to worship at Immanuel until his death. He had strong faith in the Lord, which he learned from little on. He was a member of the Sons of the American Legion Post #326, also in Osmond. He was proud and honored to be a member and assist the veterans who sacrificed so much. Mike’s greatest passion in life was his daughters and grandkids. He always told them, “Just make me proud.” They always did because he was very proud of his girls. Mike’s friends were also his family. He loved to visit with all of them and never missed an opportunity to see them, even if just for a few minutes. He cared for them all. Mike enjoyed farming and was very good at it. He had vision to see the best in the land and in life. He worked hard and enjoyed his free time boating, traveling, side-by-side riding, fishing and being with friends. Michael is survived by his spouse, Jodi; his daughters, Rachel and Beau Simpson of McLean, Melissa and Alex Guenther of Crofton; his grandchildren, Ryker, Lakyn, Kinsley and one on the way; his parents, Howard and Sharon Timmerman of Osmond; two brothers, Daniel Timmerman of Osmond and Neil and Lisa Timmerman of Urbandale, Iowa; his father- and mother in-law, Eugene and Barbara Gillilan of Wausa; sister-in-law Joan and Steve Hult of Norfolk; and brother-in-law Kenneth and Misty Gillilan of Wausa. He has many nieces, nephews and cousins. He was preceded in death by both sets of grandparents. Casket bearers are Grant Albers, Randy Albrecht, Joseph Aschoff, Douglas Koehler, Wayne Koehler, Todd Ridder, Roger Timmerman and Cory Zimmerman. In lieu of flowers, the family asks that memorials be made to the family for a later designation. Online condolences may be sent to www.stonacekfuneralchapel.com.

OSMOND &#8212; Private family services for Michael W. &#8220;Mike&#8221; Timmerman, 58, of Osmond will be held Thursday, April 16, at the Immanuel Lutheran Church in Osmond with the Rev. Glen Emery officiating. The service at the church will... View Obituary & Service Information

The family of Michael W. "Mike" Timmerman created this Life Tributes page to make it easy to share your memories.