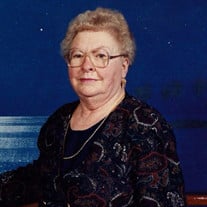 RANDOLPH -- Funeral service for Mildred R. Roland, 91, of Randolph will be held at 10:00 a.m., Monday, March 15, 2021 at St. Jane Frances de Chantal Catholic Church in Randolph. Father Tim Forgét will be officiating the service. Burial will take place at St. Frances Catholic Cemetery rural Randolph. Visitation will be held from 4:00 - 6:00 p.m., Sunday, also at the catholic church in Randolph. Christian Mothers Rosary starting at 3:30 p.m., Vigil Rosary starting at 6:00 p.m. The funeral service will be live-streamed on Stonacek Funeral Chapel Facebook page. Mildred died on Thursday, March 11, 2021 at Colonial Manor in Randolph. Stonacek Memorial Chapel in Osmond is in charge of the arrangements. Born Sept. 30, 1929, at Homer, Mildred was the daughter of Bernard and Wilhelmina (Hartz) Hassman. She graduated from St. Frances Catholic High School in Randolph in 1948. She married Gayle H. Roland on July 31, 1948, at St. Frances Catholic Church in Randolph. After Mildred and Gayle were married, they lived in Wayne. They later moved to Council Bluffs, Iowa, where Mildred worked at Brandeis in Omaha. In 1987, he retired and they moved back to Randolph. Mildred worked various jobs over the years, including as a waitress, but primarily she was a loving mother and devoted spouse. Mildred enjoyed going for walks, doing various volunteer work in Randolph, traveling and socializing with her many friends. She was a member of St. Frances Catholic Church, its Christian Mothers and Altar Guild. She also was a member of the Randolph VFW Auxiliary and the Randolph Senior Center. Survivors include a son, James Roland of Randolph; daughters Linda (Lyle) Holmes of Camdenton, Mo., Barbara (Pete) Ault of Spirit Lake, Iowa, Gloria (Robert) Winkelbauer of Randolph and Grace Roland of Magnet; along with nine grandchildren and 12 great-grandchildren. She was preceded in death by her parents, Bernard and Wilhelmina Hassman; her spouse, Gayle Roland on Aug. 5, 1995; a son, Gayle L. Roland; and brother Theodore Hassman. George Bradley, cantor and guitarist, will provide the music. Hymns selected include “Be Not Afraid,” “Prayer Of St. Francis,” “You Are Mine” and “Amazing Grace.” Casket bearers will be Greg Shallenberger, Clayton Shallenberger, Austen Roland, Jason Roland, Alexis Ault-Ozee and Ryan Hegre. Condolences may be expressed to the family online at www.stonacekfuneralchapel.com.

The family of Mildred R. Roland created this Life Tributes page to make it easy to share your memories.

Send flowers to the Roland family.