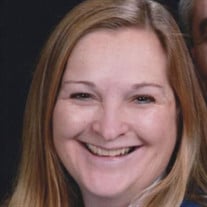 NORFOLK – Celebration of life service for Molly F. Herpy (Kurtzhals) 56, of Norfolk, will be at 10:30 a.m. Saturday, March 6, 2021 at the Stonacek Funeral Chapel in Norfolk. The Rev. Randall Coffin will officiate. Private inurnment will be at a later date at Prospect Hill Cemetery, Norfolk. Visitation will be 4-7:00 p.m., Friday, March 5, at Stonacek Funeral Chapel in Norfolk. She died Sunday, Feb 28, 2021 at her residence in Norfolk. Stonacek Funeral Chapel in Norfolk is in charge of the arrangements. Marleen F. “Molly” Kurtzhals was born April 13, 1964, in Wenatchee, WA. the daughter of Robert and Carol Kurtzhals. Molly attended Hartington Cedar Catholic School, was a 1982 graduate of Coleridge High School. She earned her Bachelor's degree from Mount Marty University (Yankton) and earned a Master's Degree from Wayne State College in Special Education. She taught Special Education for the Norfolk Public Schools for over 20 years including Woodland Park Elementary, Northern Hills Elementary and Jefferson Elementary Schools. She married the love of her life, Keith Herpy, 3/8/1996 in Madison, NE. They lived in Norfolk, later moved to an acreage outside of Pierce and then relocated back to Norfolk. She loved her family more than anything especially her children Greg Rethwisch and Todd Herpy. Molly was a lover of children...all children. She worked tirelessly as a special education teacher to give each child their best chance to learn. She was a special friend to all of the neighborhood children. She worked on the Foster Care Review Board in Norfolk for years earlier in life. She taught Sunday school for years as well. She also volunteered in the church nursery at times. She was a member of First Christian Church of Norfolk. Survivors include her husband, Keith of Norfolk; son Greg Rethwisch of Omaha; son Todd Herpy of Green Bay; sister Teresa (Howard) Miller of Gig Harbor, WA; sister Lola (Mark) Kling of Kent, WA; sister Catherine Hansen of Seattle, WA; brother Robert (Jacgue) Kurtzhals of Kent, WA; and sister Clara (Bruce) Thoene of Omaha; along with many cousins, nieces and nephews. She was preceded in death by her father Robert Kurtzhals and her brother Jerry Kurtzhals. In lieu of flowers the family would appreciate memorials to St Jude's Children's research hospital. Condolences may be expressed to the family on-line at www.stonacekfuneralchapel.com.

NORFOLK &#8211; Celebration of life service for Molly F. Herpy (Kurtzhals) 56, of Norfolk, will be at 10:30 a.m. Saturday, March 6, 2021 at the Stonacek Funeral Chapel in Norfolk. The Rev. Randall Coffin will officiate. Private inurnment will... View Obituary & Service Information

The family of Molly F. Herpy created this Life Tributes page to make it easy to share your memories.

Send flowers to the Herpy family.