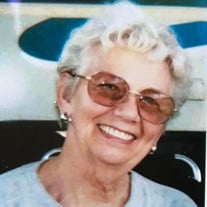 NORFOLK -- Memorial service for Norma J. Murray, 85, of Norfolk will be held at a later date. It is with great sadness that we announce the passing of our mother, grandmother, great-grandmother, aunt and sister Norma J. Murray, from complications due to Alzheimer’s. Norma passed in the evening of December 14th, 2021 at St. Joseph’s Rehabilitation and Care Center in Norfolk, NE where she had been a resident for the past two and a half years. Stonacek Funeral Chapel is in charge of the arrangements. Norma lived an interesting and varied life. She was born in Burke, SD on Feb. 12th 1936 to Oscar and Elsie (Lindwurm) Fode. She was the big sister to Mary Anne and Janice. Norma attended school at the McCumber Country School District #54, south of Burke but everything she needed to know, she learned on the farm. Her favorite horse was her Blackie. Blackie would wait for her at the end of every school day. She would jump up on his back and ride him – no saddle needed. It was during this time that she met the Stahlecker family – there were 8 of them and all the boys were handsome! She caught Harold’s eye though and he was determined to make her his wife. One October day in 1952, on leave from the Marine Corps, he came by the Fode farm and asked Elsie if he could marry her daughter. When Norma came in from the field, Elsie told her to “Go get dressed! You’re going downtown to get a marriage license!” They were married on Oct, 15th, 1952 in Gregory, SD. From there, Harold took his bride to San Francisco, where she would make her home in the Bay Area for the next 64 years. Norma Jean and Harold raised their children Rick, Lorrie and MaryLee in Pacifica, CA mostly under the fog. Norma worked as a yard duty teacher, as a clerk in a children’s clothing store and then at State Farm Insurance company. She loved her time at State Farm and retired after an 18-year career with them. She and Harold divorced in 1976. Then, the universe contrived a mis-dialed phone call and she met the love of her life – Jack Murray. Jack and Norma were two peas in a pod. They bought a cabin on the Russian River where they spent many wonderful, happy, fun times. It was their favorite place to be. Everyone loved Jack and he loved Norma. Unfortunately, they didn’t get as much time together as they had hoped for and Jack passed in 1986. But the universe wasn’t done with Norma yet. In 1997 she met her Significant Other Matt Hise. They both had traveling in their blood and in 1998 they sold what they had, bought a beautiful motor home and started traveling the country. Norma always talked about how much fun they had on the road and the friends they made in various cities. They spent many summers in Yankton, SD on the Missouri River. With so many relatives in the Yankton area, there was always something for them to do or someone to visit. Sadly, Norma lost Matt to a brain tumor in the summer of 2000. Norma decided to return to the Altamont, a senior housing facility in Rohnert Park, CA. She kept busy there visiting neighbors, shopping, going out to lunch and/or dinner, participating in the activities and generally being as busy as she could be. It was almost impossible to catch her at home. She spent many hours at Mary Lee and Mike Tobin’s house with her grandchildren Shannon, Sean and Sheamus going to sports games, competitions and generally enjoying her role as Grandma. Summers she would travel to South Dakota to visit with her mother Elsie Fode, in Burke, SD. Her sisters Mary Anne and Janice would also arrange to visit and they were lucky to have lots of family time. Norma was happiest when she was busy and on the move. She could strike up a conversation about anything, and she always had a smile on her face. She wasn’t afraid to look silly yet she took great care with her appearance. She had great taste and was always very well put together. Even as Alzheimer’s started to take away her memories, she never lost her sense of style or her ability to crack jokes and laugh. She had a great big smile and when she laughed, she put her whole body into it. You laughed with her because you just couldn't help it. Her last few years were spent in Norfolk, NE. She lived for 2 years at The Meadows where she would walk the hallways and make new friends. When we went to see her, we had to “find” her because she was always visiting with someone, or outside in one of the rocking chairs, or in the dining hall being a typical social butterfly. A series of strokes took her socializing abilities away and she lived for the next 2-½ years at St Joe’s Nursing Home. The staff there took excellent care of her and we are all grateful to them for their patience, love and dedication. Norma is survived by her children Rick (Barbara) Stahlecker of Norfolk, MaryLee(Mike) Tobin of Windsor, CA, and Lorrie (Brad) Milton of Lakewood, CA. Her sisters Janice (Swede) Lindquist of Gregory, SD and Mary Anne (Del – passed) Carr of Ft. Collins, CO also mourn her passing. She leaves behind 6 grandchildren, and 10 great-grandchildren. Also preceding her in death were her husband Harold, husband Jack and her parents Oscar and Elsie Fode. If you want to say a little something to remember her – just grab a glass of red wine, life it up and think something happy. That’s what she would do. Condolences may be expressed to the family on-line at www.stonacekfuneralchapel.com.

The family of Norma J. Murray created this Life Tributes page to make it easy to share your memories.

Send flowers to the Murray family.