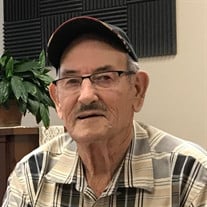 OSMOND — Private family graveside services for Norman D. Lorenz, 88, of Osmond will be held at Immanuel Lutheran Cemetery, Osmond, with the Rev. Glen Emery officiating. Military Rites will be conducted by American Legion Post 326, VFW Post 7838 and Son’s Of The American Legion of Osmond. He died Tuesday, March 31, 2020, at the Osmond General Hospital. Norman was born Dec. 7, 1931, on the family farm 2½ miles south west of Osmond. His parents were Walter and Beata (Schumacher Lorenz) and was blessed with two siblings, the late Janelle Goger of Escondido, Calif., and a brother Wayne, (Arlene) Lorenz of Ponte Vedra Beach, Fla. Norman attended school District 34 in the southwest corner of the section he lived, attended seventh and eighth grade at Osmond Immanuel Lutheran School, and graduated from Osmond High School in 1949 with a class of 31. As a child he told stories of remembering his 10th birthday occurring on the attack of Pearl harbor, with recollections of large formations of B-17 and B-29 bombers flying over his school and practicing “black outs” at home. His card playing career started at home where his evenings were spent playing a three–handed card game, pinochle, with his brother and father, while his mom and sister busied themselves about the house. Being raised in the 30s was tough, yet he was able to join the local 4-H club. He took the pledge “I pledge my head for clearer thinking, my heart for greater loyalty, my hands for better service and my health for better living for my club, my community and my country. He was proud of his son’s involvement in scouts and two grandsons earning Eagle Scout. He was married to the love of his life, Jacqueline Simmons, on May 4, 1952; and they celebrated over 67 years of commitment to each other. On Feb. 24, 1952, he was sent to Fort Riley, Kan., for infantry training, leaving his new expecting wife at home with his parents. His first son, Michael D. Lorenz, was born July 4, 1953. His orders were changed from front lineman in Korea to Southern Germany upon signing of the armistice. Being a farm boy, he had the job of repairing and making sure the weapons were ready at all times. He also spent a little time playing Pay Day Poker for which he was the unit’s bookie. He returned home to the family farm February 1955 to take over. Even though the first years were tough, he commented the years between 1956–1960 were good as their two daughters, Debra (Lorenz) Schmit was born in 1956 followed by Patrice (Lorenz) Krienert in 1960. Hard times continued on the farm, and he considered quitting but the banker told him he could not — he owed too much money. A career as a dairyman began, milking cows every morning and night for the next 30 years, quitting when his kids left home and his wife selling the herd one day when he was gone. Now with the kids leaving home and no cows, they ventured into the next chapter of his life. Foster parenting was very rewarding and were blessed to have first Craig and Terri Larkin, followed by a few years later by David and Andy Miller. After 30 years of working side by side on the farm, it was time to turn it over to the next generation. He tore down old houses and barns to hand build one of the first bed and breakfast in the state of Nebraska. He joined his wife in the decorating business the next 25 years. Meeting many interesting people, they entertained many guests at the Willow Way B&B for over 20 years. He built a retirement home next door to the B&B and resided here until his death. He was not the type to just sit and be idle. Lets list a few of his hobbies and talents: hunting, trapping, fishing, refinishing, painting, making baskets, stained glass, wine, gardening, planting trees, playing cards, caning chairs, bowling and writing his own autobiography these past two months. His was involved in his community and church. He had a lifelong faithfulness in God and was baptized and confirmed at Immanuel Lutheran Church in Osmond. Let’s mention a few of his involvements: community club, legionnaire, tree board, housing committee, Osmond Venture Resources, NFO member, cemetery committee, trustee, treasurer, RC&D member, Pierce County Visitor Bureau, school board, Sunday school teacher, Memory Lane Spear-header, senior citizens member and hospice volunteer. In his own words I quote, “I have lived a poor man, but died a rich man. The real riches in my life is the legacy I leave, blessed with 12 grandchildren and 26 great-grandchildren. Each one, perfect and easily worth a million dollars. This makes me one of the richest men in Pierce County.” One of his last accomplishments was establishing the Osmond Fruit Orchard in 2008. Many Osmond residents and passer-bys on Highway 20 would see him spending hours planting and weeding, often on his hands and knees. This generous man would invite you all to stop sometime and enjoy the fruits of his labors or sit in the gazebo to remember our own special memory of him. He ended his autobiography by stating that its not things in your life that are important. Remember to smile, open your heart, love and go on. Online condolences may be sent to www.stonacekfuneralchapel.com.

The family of Norman D. Lorenz created this Life Tributes page to make it easy to share your memories.

Send flowers to the Lorenz family.