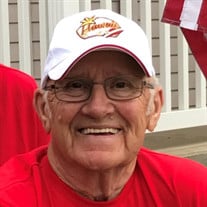 NORFOLK -- Celebration of life service for Paul W. Claussen, 84, of Norfolk will be held at 10:30 a.m., Wednesday, December 1, 2021 at the Stonacek Funeral Chapel in Norfolk. Rev. Kurt Busskohl will be officiating. Visitation will begin one hour prior to the service on Wednesday. Inurnment will be held at the Bloomfield Cemetery, Bloomfield. Paul went to be with the Lord on Wednesday, November 24, 2021 at the Heritage of Bel Air Nursing Home in Norfolk following many years of health struggles. Stonacek Funeral Chapel is in charge of the arrangements. Paul Wilbert Claussen was born on April 4th, 1937, in Bloomfield NE to John William and Adele (Loeding) Claussen. He was confirmed at St. Mark’s Lutheran Church in Bloomfield, NE. Following school, he farmed with his family around the Bloomfield and Wausa area. On May 31st, 1959, he married Karen Kay Busskohl at the Christ United Methodist Church in Bloomfield NE. Paul and his wife Karen, lived in Wausa NE after they were married and Paul continued to farm until moving to Plainview NE to work for Kamrath Farms. In 1971, Paul and Karen moved to Norfolk NE where Paul began working at Clark Bros. Transfer and retired from there in 2003. The family of Paul W. Claussen would like you to know he was the true definition of a ‘hard-working-man’. Paul loved the Lord, his country, and his family. He was up early each morning and went to work to provide for his family. When Paul was not working, he enjoyed making others smile by being silly, sharing with others his ‘guns’ (muscles), lending a helping hand to his fellow man or woman, fishing with his children and grandchildren, attending his grandchildren’s events and being their biggest fan, listening to his rockabilly and country western music (Fats Domino, Johnny Cash and Waylon Jennings), checking out classic cars, trips to South Dakota, tending to his garden and home, watching his many favorite NFL teams and the Huskers, winding down from a hard day’s work with a beer and in his later years, watching horseracing and trips to the casinos. Paul will be missed by his family and the many, many friends he made along his journey here on earth. This Christmas season, when you turn on your Christmas lights, remember Paul. He loved sharing his ‘Mr. Claus’ decorating skills for all to enjoy! Paul is survived by his spouse of 62 years, Karen Claussen of Norfolk NE; three children, Jami (John) Brosh of Ashland NE, Joni (Scott) Reynoldson of Grand Island NE, Heidi (Roger) Koerting of Norfolk NE; six grandchildren, J.P. (Melissa) Brosh of Omaha NE, Bailey (Sam) Rouse of Doniphan NE, Aron (Kellie) Volmer of Lake Oswego OR, Janai Reynoldson of Grand Island NE, Elliot (Cari) Koerting of Omaha NE, Tessa (Stefan) Medel of Omaha NE.; three greatgrandchildren, Adelaide Brosh, Ansley Brosh and River Volmer; four siblings, Dianne (Eldon) Fleming of Norfolk NE, Velda (Jim) Long of Norfolk NE, Douglas (Karen) Claussen of Wausa NE, Robert (Kathy) Claussen of Wausa NE; one sisterin-law, Joanne Claussen of Norfolk; brother-in-law and sister-in-law Kurt and Marilyn Busskohl, Grand Island NE; many nieces and nephews and his bff (best furry friend), Lily and human friend, Richard Jaeger, Norfolk NE. Paul was preceded in death by his parents; brothers, Detlef Claussen, Harvey Claussen, John D. Claussen, Martin Claussen, Harold Melvin Claussen; sisters Marian (Claussen) Huttman, Ruby (Claussen) Hammer, and Shirley (Claussen) Poppe; father-in-law and mother-in-law, Herbert and Florence Busskohl; and a great granddaughter. In lieu of flowers, memorials may be directed to the family. Condolences may be expressed to the family on-line at www.stonacekfuneralchapel.com.

NORFOLK -- Celebration of life service for Paul W. Claussen, 84, of Norfolk will be held at 10:30 a.m., Wednesday, December 1, 2021 at the Stonacek Funeral Chapel in Norfolk. Rev. Kurt Busskohl will be officiating. Visitation will begin one... View Obituary & Service Information

The family of Paul W. Claussen created this Life Tributes page to make it easy to share your memories.

Send flowers to the Claussen family.