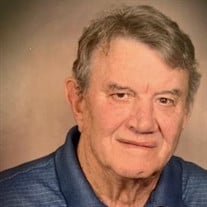 OSMOND - Mass of Christian Burial for Paul H. Kahler, 75, of Osmond will be held at 10:30 a.m., Friday, April 8, 2022 at the St. Mary's Catholic Church in Osmond. Officiating the service will be Father Tim Forget and Deacon Doug Tunink. A visitation will be held from 9:00 a.m. to 10:00 a.m. Friday, at the church, with a rosary starting at 10:00 a.m., also at the church. Paul died Wednesday, March 30, 2022 at University Of Nebraska Medical Center in Omaha. Arrangements are by Stonacek Memorial Chapel in Osmond. Paul was born on Aug. 7, 1946, in Osmond, he was the son of Wallace and Gertrude (Luebbers) Kahler. He attended St. Mary’s Catholic School to the eighth grade and graduated from Osmond High School in 1964. While in high school, Paul was very active in sports. He loved football and basketball. After graduation, Paul and several of his friends worked on road construction. In August 1964, Paul decided to go to Oregon. On Nov. 9, 1964, Paul was married to Judith Ann (Judy) Reding at St. Mary’s Catholic Church in Eugene, Ore. Paul and Judy lived in Oregon until June 1968, during which time Paul worked for a lumber mill. Paul and Judy and their two small children, Michele and Darrell, decided to return to Osmond. Paul joined his father at Wally’s Shop. He also drove school bus for several years. In 1976, upon Wally’s retirement, Paul took over the operation of the business. Paul had been a volunteer fireman for many years. He also played softball with the Osmond team and did some umpiring. He was an avid fisherman and loved to hunt and take drives in the country to see farmers plant and harvest crops. He was a member of St. Mary’s Catholic Church in Osmond and served on the Osmond Fire Department. Survivors include his spouse, Judy Kahler of Osmond, children Michele Kahler of Omaha and Darrell (Julie) Kahler of David City; three grandsons, Tanner Kahler of Milwaukee, Wis., Logan (Annie) Kahler of Lincoln, Reilly Kahler (Samantha Hays) of Vermillion, S.D; and siblings Mari (Howard) Zeman of Montrose, Colo., and Jackie (Garry) Hazen of David City, brothers-in-law Ken Reding of Montana, Arlen (Mary) Reding of Georgia, Ron (Lin) Reding of Bennington, NE, and Diane Alexander of Eugene, OR, and numerous nieces and nephews. He was preceded in death by his parents, Wallace and Gertrude, sister Carolyn Newburn, sister-in-law Judy Reding, brother-in-law Jim Reding, and brother-in-law Vidar Alexander. Music will be provided by organist Melissa Lind. Condolences may be expressed to the family online at www.stonacekfuneralchapel.com.

OSMOND - Mass of Christian Burial for Paul H. Kahler, 75, of Osmond will be held at 10:30 a.m., Friday, April 8, 2022 at the St. Mary's Catholic Church in Osmond. Officiating the service will be Father Tim Forget and Deacon Doug Tunink. A visitation... View Obituary & Service Information

The family of Paul H. Kahler created this Life Tributes page to make it easy to share your memories.

Send flowers to the Kahler family.