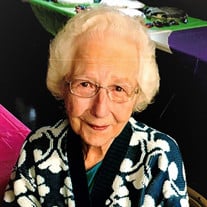 WINSIDE -- Funeral service for Phyllis I. Gallop, 93, of Norfolk will be held at 10:30 a.m., Thursday, March 10, 2022 at the Trinity Lutheran Church in Winside. Pastor Glenn Kietzmann will be officiating the service. Interment will be held at the Pleasant View Cemetery, rural Winside. Visitation will be 4:00-7:00 p.m., Wednesday, at the Stonacek Funeral Chapel in Norfolk. Phyllis passed away on Saturday, March 5, 2022 at the Faith Regional Hospital in Norfolk. Stonacek Funeral Chapel in Norfolk is in charge of the arrangements. Phyllis was born on September 10, 1928 in Stanton, Nebraska to Henry and Laura (Lemke) Muhs. She attended grade school in Stanton, then grew up in Wisner and graduated from Wisner High School in 1945. She then taught 2 years at a country school north of Wisner. She married John J. Gallop Sr. on June 2, 1947 in Papillion, NE. After marriage they resided in Pilger, and then moved to Wisner. In 1951 they moved to Winside and in 1952 they purchased the Winside Motor in Winside and they owned and operated it until 1981. They moved to Norfolk in 1986 and she worked at Wal Mart for 15 years. Phyllis enjoyed sewing, quilting, knitting, decorating cakes, crocheting, flowers and reading. She loved to spend time with her family. She was a member of Trinity Lutheran Church, Winside, member of American Legion Auxiliary, and the Wayne Eagles Club. Phyllis is survived by her children Warren Gallop of Hoskins, Barbara (Dean) Junck of Carroll, Beverly (Robert) Neel of Wayne, Nancy (Wayne) Schulz of Battle Creek, NE, Laurie (Ed) Lienemann of Hoskins, daughter-in-law Adele Gallop of Hoskins, 16 grandchildren, 29 great-grandchildren, 3 great-great-grandchildren, 2 sisters-in-law, 1 brother-in-law, 1 aunt, and many nieces and nephews. She was preceded in death by her husband John J. Gallop Sr. on Dec. 6, 2016, son John J. Gallop Jr., parents Henry and Laura, sister Darlene Wiese, and brother Harold Muhs. Pianist for the service will be LeNell Quinn and soloist will be John Gallop III. Casket bearers will be her grandsons Jeff Gallop, Dwaine Junck, John Gallop III, John Neel, David Schulz, Lynn Junck, James Neel, and Caleb Lienemann. Honorary casket bearers will be her granddaughters Pamela Westerfield, Maribeth Bobeldyke, Maggie Quigley, Elsa Parsons, Laura Novak, Meghan Leblanc, Hillary Pfeifer, and Shelby Erichsen. Condolences may be expressed to the family on-line at www.stonacekfuneralchapel.com.

WINSIDE -- Funeral service for Phyllis I. Gallop, 93, of Norfolk will be held at 10:30 a.m., Thursday, March 10, 2022 at the Trinity Lutheran Church in Winside. Pastor Glenn Kietzmann will be officiating the service. Interment will be held at... View Obituary & Service Information

The family of Phyllis I. Gallop created this Life Tributes page to make it easy to share your memories.

WINSIDE -- Funeral service for Phyllis I. Gallop, 93, of Norfolk...

Send flowers to the Gallop family.