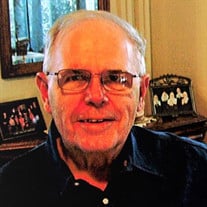 NORFOLK -- Memorial service for Ralph R. Goetsch, 79, of Norfolk will be held at 2:00 p.m., Tuesday, February 15, 2022 at Christ Lutheran Church, Norfolk. Rev. Mike Moreno will be officiating the service. Inurnment will take place at Best Cemetery, rural Norfolk. Visitation will be held one hour prior to service time also at the church. Military rites will be conducted by the American Legion Post 16, V.F.W. Post 1644, and the United States Army Honors Guard. Ralph passed away on Tuesday, February 8, 2022 at The Heritage at Fountain Point Assisted Living in Norfolk. Stonacek Funeral Chapel is in charge of the arrangements. Ralph was born on February 9, 1942 on the family farm rural Norfolk, to Karl and Viola (Bauermeister) Goetsch. He attended rural country school, south of Norfolk, and then attended parochial school at Christ Lutheran School in Norfolk from 2nd grade to the 8th grade. He then graduated from Norfolk High School. Ralph served 9 years in the Nebraska National Guard. He married Karen Kaiser on February 9, 1964 at the First United Methodist Church in Norfolk. He was proud to have served as an actor in The Last Supper at the United Methodist Church in Norfolk in 1984, Karen was the narrator. He was a member of Christ Lutheran Church, Norfolk and a charter member of the Northeast Nebraska Touring Motorcycle Club. Ralph and Karen were avid motorcyclists accumulating over 250,000 miles of travel between 1979-2000. After high school Ralph worked construction and then later for Gerhold Concrete. In the early 1960’s he worked for Midwest Beef, Zastrow Turkey Farm, and later Battle Creek Co-op. In 1969, Ralph and Karen operated and owned their own chicken farm of 18,000 laying hens for 10 years. Ralph then began working for Goodyear in Norfolk from 1979 until he retired in 2003. Ralph enjoyed collecting chess sets (63 and still counting), lapidary rock work, photography, fixing anything that was broken, going to coffee club gatherings at McDonalds, waltz and polka dances, going to auctions, gardening, and fishing and camping while going on motorcycle vacations with his family. Survivors include his spouse Karen Goetsch of Norfolk, children Karston Goetsch of Omaha, Renita (Ed) Lockner of Granger, IA, Kelby (Kristy) Goetsch of Meadow Grove, Kenyon Goetsch (Angie Warman) of Omaha, 8 grandchildren, 13 great grandchildren, siblings Eugene (Alice) Goetsch of Randolph, Carol (Tom) Bland of Norfolk, Lynette (Louis) Pofahl of Norfolk, Leland (Carla) Goetsch of Indiana. He was preceded in death by his parents Karl and Viola, sister Ardyce Goetsch, grandson Charlie Kohles. Organist for the service will be Starla Landkamer. Memorials may be made to the family for a later designation. Condolences may be expressed to the family on-line at www.stonacekfuneralchapel.com.

The family of Ralph R. Goetsch created this Life Tributes page to make it easy to share your memories.

Send flowers to the Goetsch family.