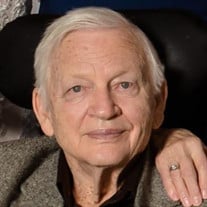 NORFOLK -- Ray Loyd Haddock, age 85, of Norfolk, Nebraska, passed away on January 20, 2021 at 6:05 a.m. at the Antelope Memorial Hospital, surrounded by his family. The private family service is yet to be announced. Stonacek Funeral Chapel in Norfolk is in charge of the arrangements. Ray Loyd Haddock was born in rural Hooker, Oklahoma on November 3, 1935 to Randal Haddock and Ada Pearl (Marteney) Haddock. He went to rural school in Hooker and then the family moved to Two Buttes, Colorado when he was 12. There he finished school, graduating from Two Buttes High School in 1954. Ray then attended Prairie Bible Institute in Alberta, Canada, graduating in 1958. After graduation, he moved to Colorado where he worked before moving to Columbus, Nebraska in 1960. There, he met his wife, Carolyn Marie Koch. Ray married Carolyn Marie Koch on June 18th, 1961. Their union was blessed with one son and four daughters. Ray worked as a machine maintenance tech at Dale Electronics and later as a jury-man carpenter, during which time he served as president and secretary of his local union. After severe back injury he got his computer-aided drafting degree and worked for ten years in that field before retiring. Ray retired in 1999, and the family moved to Stanton, Nebraska before landing in Norfolk, Nebraska in 2013. Ray was preceded in death by his father, Randal Haddock, mother, Ada Haddock, and brothers, Thomas Haddock, Delmer Haddock, Ivan Haddock, and sister-in-law Paula Haddock. Ray is survived by his wife, Carolyn Haddock, of Norfolk, Nebraska, son, Joel (Nancy Rodier) Haddock of Lakewood, Colorado, daughter, Sheryl Haddock of Norfolk, Nebraska, daughter, Rhonda (Terry) Otto of Lincoln, Nebraska, daughter, Vicki Haddock of Neligh, Nebraska, daughter, Elizabeth Anderson of Columbus, Nebraska; son-in-law, Todd Bergman; and ten grandchildren and five greatgrandchildren. Ray’s joy in life was spending time with his children and his grandchildren, Trever, Hunter, and Aleesha Bergman, Audrey (Caleb) Friesen, and Alex, Ryan, and Nicole Otto. He is also survived by his brother, Neal Haddock of Ulysses, Kansas; brother, Alvin (Bessie) Haddock of Bayfield, Colorado; sister, Oma McKitrick of Pueblo West, Colorado; brother, Laroy (Rose) of Two Buttes, Colorado; sister, Becky (Gary) Prewett of Ft. Collins, Colorado; brother, Fred (Doris) Haddock of Pueblo, Colorado; sister-in-law, Lisa (Delmar) Haddock of San Diego, California; brother, Kenny Haddock of Two Buttes, Colorado, and many nephews and nieces. Ray was quiet, kind, and humble, always being supportive to those who needed him. He never complained and was respected as a man of deep faith. His stories and his spirit will live on in our hearts and memories forever. Condolences may be expressed to the family on-line at www.stonacekfuneralchapel.com.

NORFOLK -- Ray Loyd Haddock, age 85, of Norfolk, Nebraska, passed away on January 20, 2021 at 6:05 a.m. at the Antelope Memorial Hospital, surrounded by his family. The private family service is yet to be announced. Stonacek Funeral Chapel in... View Obituary & Service Information

The family of Ray Loyd Haddock created this Life Tributes page to make it easy to share your memories.

Send flowers to the Haddock family.