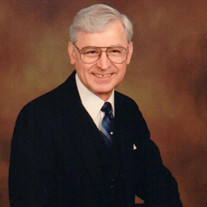 NORFOLK -- Funeral Service for Rev. Dr. George William Heusinger, 94, of Norfolk, will be held at 10:30 a.m., Saturday, October 12, 2019 at the Community Bible Church in Norfolk, with Reverend Arin Hess and Rev. Dr. Walter Jaworski officiating the service. Burial will take place at Hillcrest Memorial Park Cemetery in Norfolk. Visitation will be held from 4:00 - 7:00 p.m., Friday, also at the Community Bible church in Norfolk. Military rites will be conducted by the American Legion Post #16, V.F.W. Post #1644, both of Norfolk, and the United States Navy Honors Guard. Reverend Heusinger went to his heavenly home on Sunday, October 6, 2019, while at Community Pride Care Center in Battle Creek. Stonacek Funeral Chapel in Norfolk is in charge of the arrangements. George was born to Joseph and Marie (Mech) Heusinger on October 5, 1925, in Marinette, Wisconsin. Though they had to work hard during the Depression years, George and his siblings, Howard, Marjorie, and Vernon, enjoyed many family times fishing, swimming, and hiking along the shores of Lake Michigan. George graduated from Marinette High in 1943 and immediately enlisted in the United States Navy. He completed basic training and Hospital Corps School at Great Lakes Naval Base, graduating with an HA3c rating. During this time, he was chosen to be a part of the Blue Jackets Choir. George then served at St. Albans Naval Hospital on Long Island, helping to care for approximately 2,500 wounded sailors each month. One Saturday evening he took a trip to Times Square which would forever change his life. After being invited inside Jack Wyrtzen’s “Word of Life” Center, he heard from the Bible God’s loving plan to send Jesus to die for the sins of the whole world, including George Heusinger. He knew he was not good enough on his own and needed Jesus to get to heaven. That night he asked Jesus to be his Savior. Shortly after this, George was transferred to Sampson Naval Hospital in Geneva, NY. He and three friends formed the Callaghan Quartet and were requested to do recordings for the Red Cross. With the end of World War II, George was honorably discharged and headed to Bob Jones Bible College. Here he was able to pursue many of his passions. He formed another quartet which sang in churches throughout the area. He played lead roles in several Shakespearean plays. But his heart was touched when one of his teachers shared the need of the Peace Evangelical Reformed Church, rural Norfolk, and Immanuel Church, rural Winside, for a pastor. He graduated from Bob Jones University in the spring of 1949 with a bachelor’s degree in ministry and then came to Nebraska for the summer. The congregations asked him to come back as their full-time pastor. After completing a graduate Degree of Divinity in 1951, he returned. He married Marjorie Ann Fleer on June 27, 1954, at the Peace Church. They were married almost 65 years. Together they ministered to three rural congregations each week, Peace Church, Immanuel Church, and the Theophilus Church near Wayne. He also directed the Hoskins Community Chorus in presentation of the Messiah for four seasons. In 1959, George believed God wanted him to begin a new church in Norfolk. He and his young family moved to town and began the Community Bible Church, where he served for almost 60 years. He loved people of all ages, but George particularly had a heart for young people. He loved planning game times, Scripture competitions, and Bible teaching opportunities in church and camp. Under his leadership, Park Avenue Christian School was established in 1979. Each year George directed the church choir in two or more vesper programs. He spent hours decorating the stage for these dramatic productions, and often wrote the script. His Sunday morning radio broadcast, Reflections, aired on WJAG for 53 years. George served on the boards of Child Evangelism Fellowship of Nebraska, Gospel Fellowship Missions, and Bob Jones University. He was also a member of the Foundations Baptist Fellowship. George was deeply moved when he was honored with an honorary doctorate in 1977, from his alma mater, which he considered his spiritual home. Family time was one of his greatest delights. Each grandchild looked forward to birthdays with Grandpa. A display of their pictures with balloons adorned the mirror. The “toys” which decorated his specially wrapped gifts were often as fun as what was on the inside. He kept a full M & M dispenser to tempt young and old alike. George is survived by a daughter, Anne Marie (Arin) Hess of Norfolk, sons, Lynn (Kathleen) Heusinger of Lafayette, Indiana, and Joel (Renee) Heusinger of Lincoln, and a brother, Vernon of Marinette, Wisconsin, as well as 12 grandchildren and 6 great-grandchildren. He was preceded in death by his wife, Marjorie in April 2019, his parents, his brother, Howard, and his sister, Marjorie. From the time George trusted Jesus as his Savior, he was consumed with the need for everyone to hear God’s simple plan of salvation. He loved to share his testimony, often with tears in his eyes, because he cared so much that others go to heaven, too. For him, heaven is now a reality. He finished his course. He kept the faith. “Well done, good and faithful servant!” Casket bearers will be grandsons Kellen, Leighton, and Logan Heusinger, Jonathan and Luke Hess; and grandsons-in-law: Jeremy Caudill, Dustin Rogers, and Brett Wilson. Memorials may be directed to Community Bible Church, 401 E. Park Ave., Norfolk, NE 68701. Testimony Time Remembering both George and Marjorie Heusinger: Sunday, 10:30 am at the church. Condolences may be expressed to the family on-line at www.stonacekfuneralchapel.com.

The family of Rev. Dr. George W. Heusinger created this Life Tributes page to make it easy to share your memories.

Send flowers to the Heusinger family.