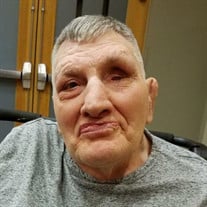 NORFOLK -- Funeral service for Richard R. Hubert, 70, of Norfolk will be held at 10:00 a.m., Wednesday, November 11, 2020 at Our Savior Lutheran Church in Norfolk with Rev. Lee Weander officiating. Graveside service will be held at 1:00 p.m., Monday, November 16, at the Upland Cemetery with Rev. Nathan Abel officiating. Visitation will be 4:00-7:00 p.m., Tuesday, also at the Our Savior Lutheran Church. The service will be live-streamed on the Stonacek Funeral Chapel Facebook page. Masks are required for the visitation and service. Richard passed away Thursday, November 5, 2020 at the Faith Regional Hospital in Norfolk. Stonacek Funeral Chapel in Norfolk is in charge of the arrangements. Richard Rodney Hubert was born on February 6, 1950 at the Seeley Hospital in Minden, NE to Carl H. and Erva (Kile) Hubert. He was mentally handicapped since he was born. He was baptized on February 6, 1950 at the Seeley Hospital in Minden. Richard grew up at home with his parents and sisters until Aug. 1958 when he went to the Bethesda Lutheran Home in Watertown, WI for 18 years. He then spent 2 years at the State Home in Union Grove, WI. On March 19, 1979 he moved to the Beatrice State Developmental Center. He moved to Norfolk in 2011 to be closer to his family and was a resident with Mosaic, which he loved very much. Richard enjoyed car rides, driving in the country past farms (especially during harvest), motorcycle rides on the Honda, lawn mower and golf cart rides, chocolate, malts, and pancakes. Richard had a love for music, especially Shania Twain and also enjoyed Cornhusker Football and bowling. Survivors include his sisters Carol (Ed) Jones of Bladen, NE, Marcia (David) Bliss of Norfolk, Cherilynn Hubert of Norfolk, nieces and nephews Brenda, Troy (Renae), David, and Heidi Jones, Nick, Nathan (Shelby), and Tyler Bliss, Cara, and Justin (Kayla) Riese. He was preceded in death by his parents Carl and Erva. Casket bearers will be Troy Jones, David Jones, Nick Bliss, Nathan Bliss, Tyler Bliss, and Justin Riese. Honorary casket bearers will be Brenda Jones, Heidi Jones, Cara Riese, Kassi Jones, Elliott Longmore, Zach Bliss, Noah Bliss, and Landee Bliss. In lieu of flowers, the family asks that memorials be made to the Richard Rodney Hubert Endowment Fund Account #EN80000614 and mailed to LCMS Foundation, 1333 S. Kirkwood Rd., St. Louis, MO 63122-7295. This endowment is used for the education and training for pastors for the LCMS. Condolences may be expressed to the family on-line at www.stonacekfuneralchapel.com.

NORFOLK -- Funeral service for Richard R. Hubert, 70, of Norfolk will be held at 10:00 a.m., Wednesday, November 11, 2020 at Our Savior Lutheran Church in Norfolk with Rev. Lee Weander officiating. Graveside service will be held at 1:00 p.m.,... View Obituary & Service Information

The family of Richard R. Hubert created this Life Tributes page to make it easy to share your memories.

Send flowers to the Hubert family.