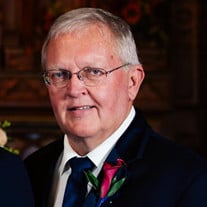 NORFOLK -- Funeral service for Dr. Richard Dee "Rich" Schroder, 67 years of age, of Pierce, will be held at 10:30 a.m., Monday, January 18, 2021 at the Stonacek Funeral Chapel in Norfolk. Officiating the service will be Randall Coffin. Interment will be at the Prospect View Cemetery, rural Pierce. Visitation will be held 2:00-5:00 p.m., Sunday, at the Stonacek Funeral Chapel in Norfolk. The funeral service will be live-streamed on the Stonacek Funeral Chapel Facebook Page. Masks are required for the visitation and funeral service. Stonacek Funeral Chapel in Norfolk is in charge of the arrangements. Dr. Schroder passed away peacefully at the family farm near Alma, Nebraska on Monday, January 11, 2021, the same family farm upon which he was born to Eldon and Phyllis (Peterson) Schroder December 7, 1953. Throughout his childhood, he attended Huntley Public School into the 8th grade, at which time he transitioned to and spent his high school years at Alma Public Schools. It was during these years at Alma, the younger, shy guy with a propensity for math met and started to study with/date his future wife, Nancy. After high school, Richard went to Kearney State College where he developed a passion for engineering that would ultimately transition into the study of medicine. Although his shyness never quite dissipated, with lack of a speech class leaving him a few credits shy of graduating, he went on to attend the University of Nebraska Medical Center. Late into his medical studies, in 1978, Richard’s father passed suddenly leaving behind a wife and two young children. Feeling a deep sense of responsibility towards caring for his mother and siblings, as well as the land his father had dedicated his own life towards, he withdrew from medical school to take over operation of the family farm. Throughout these transitional years, Richard and Nancy continued to grow their relationship and love for one another. After nearly 10 years of dating, Rich and Nancy were united in marriage on February 9, 1980. To this union, 3 children were born: twins, Cristina and Bryce, followed by younger sibling Brock. Richard continued to farm for 3 years following the birth of the twins before the farm crisis of the 80’s coerced him into returning to medicine as a career. Starting over from ground zero, he completed medical school in 1991, and started practicing in Kimball, Nebraska. Although he enjoyed family practice, the need to pursue another area of medicine beckoned and he returned to UNMC to complete a residency in Anesthesia in 1996. Initially, Dr. Schroder’s passion was the “tough cases” where he honed a skillset that served him well throughout his professional life at the Fremont Area Hospital, on staff at UNMC, at Bryan Lincoln General Hospital, and at Faith Regional Hospital in Norfolk. Although he got a tremendous fulfillment from practicing medicine, his true love was farming. In 2016, Rich followed his passion and retired from medicine to become a full-time farmer. Although always tethered to farming, Rich was a man of many interests and talents and touched the lives of many through his work, his hobbies, and his day to day errands he frequently ran. He handled the building and remodeling of nearly every home in which the family lived. Having never quite rid himself of the engineering bug, he was a capable carpenter, electrician, and plumber. Furthermore, he loved his classic cars, and was a dedicated purist doing much of the mechanical work himself to maintain the history and identity of the cars. He also tinkered on his farm equipment, enjoying the engineering and production of unique parts he designed himself. He was a walking encyclopedia of how to do nearly any fix-it job, a trait he attributed to his own father. When he had any leisure time, he enjoyed sports—watching the Huskers and attending his kids’ and grandkids’ activities. Though a man of many talents, Rich’s most important and memorable role was as a husband, father, grandfather, and friend to many. He will be deeply missed and leaves behind a legacy of hard work focused on excellence in everything he did with a specific dedication to the land and the science of agronomy, which became his focus after a life of service in medicine. These traits will live on in those whom he leaves behind. Richard was preceded in death by his father Eldon Schroder, sister Sharon Schroder, and granddaughter Ava Schroder (Daughter of Bryce Schroder.) Richard is survived by his wife Nancy (Walker) of just over 40 years of marriage of Pierce, his mother Phyllis (Pederson) Schroder of Holdrege, his daughter, Cristina (Schroder) Brovont, DDS, married to Tim Brovont, DDS, of Pierce and their 4 children: Wesley, Gage, Hudson, and Ryker; son, Bryce Schroder, PhD., married to Valerie (Cobb) Schroder of Fort Collins, CO and their 3 children: Kayla, Anthony, and Cora; son Brock Schroder, MSME, married to Kelsey (Knobbe) Schroder, PharmD, of West Point, and their son Dax; sister, Susan Schroder of Overland Park, Kansas, and brother Loren Schroder married to Shelly (Haussermann) Schroder and their 4 children: Katherine, Eric, Ally and Eden. Pallbearers are Brody Molzahn, Michael Lowe, Joe Schnuerle, Troy Kimball, Eric Schroder, and Andrew Wolff. Memorials received by the family will be designated at a later date. Expressions of caring and kindness can be sent to the family at www.stonacekfuneralchapel.com.

NORFOLK -- Funeral service for Dr. Richard Dee "Rich" Schroder, 67 years of age, of Pierce, will be held at 10:30 a.m., Monday, January 18, 2021 at the Stonacek Funeral Chapel in Norfolk. Officiating the service will be Randall Coffin. Interment... View Obituary & Service Information

The family of Dr. Richard D. "Rich" Schroder created this Life Tributes page to make it easy to share your memories.

Send flowers to the Schroder family.