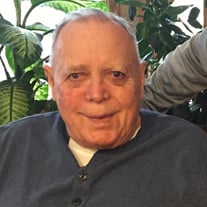 BOW VALLEY -- Funeral service for Robert N. "Bob" Mines, 79, of Norfolk, formerly of Crofton, will be held at 10:30 a.m., Monday, January 21, 2019 at the St.'s Peter and Paul Catholic Church in Bow Valley with Father Eric S. Olsen officiating. Interment will be in the parish cemetery, Bow Valley. Visitation will be 2:00-4:00 p.m., Sunday, Jan. 20 also at the church with a Vigil service beginning at 4:00 p.m. Robert died Tuesday, January 15, 2019 at the Heritage of Bel Air Nursing Home in Norfolk. Stonacek Funeral Chapel in Norfolk is in charge of the arrangements. Bob was born on May 8, 1939 to Bernard and Edelwalda (Rolfes) Mines rural Hartington, NE. He attended grade school at St.'s Peter and Paul in Bow Valley. Bob grew up in rural Hartington, and worked on the family farm with his father until 1987 when Bernard passed away. He then moved to Crofton in 1987 and he delivered the Yankton Daily Press and Dakotan, the Norfolk Daily News, and the Omaha World Herald throughout Crofton. He was awarded the People’s Choice Award as newspaper carrier for the Yankton Daily Press and Dakotan. He was awarded his certificate of Merit from the Norfolk Daily News. Bob was also recognized as the “Hometown Hero” as part of the Nebraska 125th anniversary in 1992. Bob moved to Yankton in 2012 and then to Norfolk in October of 2017. Bob enjoyed farming and playing cards. Robert loved his nieces and nephews and also his great nieces and great nephews. Survivors include his brother Martin (Alice) Mines of Gardena, CA, sister Rosemary Haas of Bellevue, sister Rita (Rao) Boppana of Playa Del Rey, CA, brother John (Mavis) Mines of Norfolk, sister Muriel (Ed) Krone of Sioux City, IA, sister Jackie (Randy) Willis of Saint Paul, and numerous nieces and nephews. Bob was preceded in death by his parents Bernard and Edelwalda, brother Donald Mines, brother and sister-in-law Dennis (Shirley) Mines. Casket bearers will be Michael Mines, Scott Mines, Marty Haas, Cory Mines, Matt Mines, Zachary Schwartz. Condolences may be expressed to the family on-line at www.stonacekfuneralchapel.com.

The family of Robert N. "Bob" Mines created this Life Tributes page to make it easy to share your memories.

Send flowers to the Mines family.