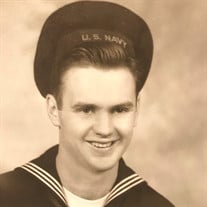 PIERCE -- Memorial service for Roland L. Voecks, 89, of Pierce will be held at 10:30 a.m., Wednesday, January 23, 2019 at the St. Joseph's Catholic Church in Pierce with Father Marc Lim officiating. Inurnment will be held at the parish cemetery, rural Pierce. Visitation will be 5:00-7:00 p.m., Tuesday, also at the St. Joseph's Catholic Church with a Rosary service beginning at 7:00 p.m, following the visitation. Military rites will be conducted by the Tomek-Otto Post 72 American Legion of Pierce and the United States Navy Honors Guard. Roland died Friday, January 18, 2019 at the Faith Regional Hospital in Norfolk. Stonacek Memorial Chapel in Pierce is in charge of the arrangements. Born July 6, 1929, in Pierce, Roland Leroy Voecks was the son of Gilbert and Mary (Havel) Voecks. He graduated from Pierce High School in 1947. He enlisted in the U.S. Navy, serving from Jan. 6, 1951, until Nov. 4, 1954. He was stationed in Guantanamo Bay, also known as “Gitmo” in Cuba, and was on the destroyer known as U.S.S. Dortch. He was stationed at the U.S. Naval Base in Boston, Mass., for two years and took care of leave papers. He married Kathryn Abler on Oct. 6, 1953, at St. Joseph’s Catholic Church in Pierce. They lived in Lincoln, and Roland worked for the post office for a short time. To this union, they had a girl and two boys. He later became acquainted with a restaurant franchise business “Kings Food Host” that took him and his family from Lincoln to Boulder, Colo., to Fort Dodge, Iowa, to Farmington, N.M. Roland and Kathryn established their own restaurant once in Farmington and named it “Katie’s Kitchen” after his spouse, which they owned and operated for 10 years. Roland and Kathryn later moved to Pierce in 1978, and they established “The Granary” restaurant in Norfolk, which they owned and operated for 25 years. Roland enjoyed golfing in his later years and dressing up as Santa (Kathryn as Mrs. Claus) during the Christmas season, visiting schools in and around Pierce for numerous years. One unique hobby Roland picked while in New Mexico was hot air ballooning; it took the entire family to provide ground support. Roland purchased his own balloon before he even knew how to fly. He then earned his pilot’s license and owned it for 25 years. He enjoyed driving his 1929 Model A in parades and restored a 1925 Model T stake bed truck. Roland was known to have a quick wit and really enjoyed visiting with friends and family. He was a member of St. Joseph’s Catholic Church in Pierce, American Legion Tomek-Otto Post 72 of Pierce and the Elks Club. Survivors include his spouse, Kathryn Voecks of Pierce; a son, David Voecks of New Mexico; a son, Dan (Pam) Voecks of Midland, Texas; a son-in-law, Dr. Randall Sussex of New Mexico; five grandchildren: Mandi, Erica, Stephanie, Derek and Isabelle; and five great-grandchildren. He was preceded in death by a daughter, Rolanda Sussex; a grandson, Garrett Voecks; his parents, Gilbert and Mary; and a brother, Donald “Pink.” Organist for the funeral will be Celine Fehringer. Condolences may be expressed to the family online at www.stonacekfuneralchapel.com.

PIERCE -- Memorial service for Roland L. Voecks, 89, of Pierce will be held at 10:30 a.m., Wednesday, January 23, 2019 at the St. Joseph's Catholic Church in Pierce with Father Marc Lim officiating. Inurnment will be held at the parish cemetery,... View Obituary & Service Information

The family of Roland L. Voecks created this Life Tributes page to make it easy to share your memories.

Send flowers to the Voecks family.