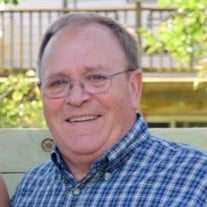 NORFOLK -- Memorial service for Russell E. "Russ" Stahlecker, 65, of Norfolk will be held at 10:30 a.m., Friday, August 21, 2020 at the St. Mary’s Catholic Church, Norfolk with Father Joseph Finn and Father Gregory Carl officiating. The service will be live streamed on the Sacred Heart Norfolk Facebook page and YouTube page. Inurnment will be held at the Hillcrest Memorial Park Cemetery, Norfolk. Military rites will be provided by the American Legion Post 16, V.F.W. Post 1644, and the United States Army Honor Guard. Russ passed away on Saturday, May 9, 2020 at his residence in Norfolk. Stonacek Funeral Chapel in Norfolk is in charge of the arrangements. Born April 25, 1955, in Butte, he was the son of Marvin and Delores (Zeitner) Stahlecker. He attended grade school in Spencer and graduated from Spencer High School. After high school, Russ served in the U.S. Army from Oct. 10, 1973, to Feb. 7, 1979, and served in Germany during part of that time. After his honorable discharge, Russ moved back to Spencer until later moving to Norfolk. He later attended Northeast Community College and received an HVAC degree. He married Cindy Walth on Aug. 30, 1975, at the Catholic church in Fairfax, S.D. To this union, there were three children: Brian, Kathy and Kevin. They later divorced. Russ began working at Affiliated Foods/AWG in Norfolk and worked there for 30-plus years until he retired in May 2017. He married Sally Finn on Nov. 26, 1988, in Norfolk. To this union was born a son, John. He was a member of the Sacred Heart/St. Mary’s Catholic Church parish, Norfolk American Legion, and he conducted the U.S. Army Honor Guard military rites for former veterans. Russ enjoyed being in the outdoors, especially camping and fishing. He liked to play cards, bake, cook, and he loved to spend time with his family and grandchildren. He was a very caring and giving person to everyone. He loved his Lord, family and country. Survivors include his spouse, Sally Stahlecker of Norfolk; his children, Brian (Kristi) Stahlecker of Spearfish, S.D., Kathy (Jeff) Johnson of Lincoln, Kevin (Beth) Stahlecker of Alvord, Iowa, and John Stahlecker of Petersburg; 11 grandchildren; his mother, Delores Stahlecker of Stuart; his siblings, Glen (Judy) Stahlecker of Spencer, Cindy (Cal) Krueger of Sioux Falls, S.D., Doug (Jan) Stahlecker of Battle Creek, Randy (Sharon) Stahlecker of Alma, Lorena (Dale) Riha of Stuart, David (Sue) Stahlecker of Pocatello, Idaho, Rex (Tracy) Stahlecker of Norfolk and Joe (Jenny) Stahlecker of Spencer. He was preceded in death by his father, Marvin, and his brother, Tyler Stahlecker. The family requests that memorials be made to the family for a later designation. Condolences may be expressed to the family online at www.stonacekfuneralchapel.com.

The family of Russell E. "Russ" Stahlecker created this Life Tributes page to make it easy to share your memories.

Send flowers to the Stahlecker family.