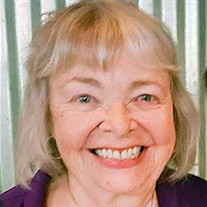 NORFOLK -- Celebration of life service for Sally Jo Petersen, 71, of Norfolk, will be held at 11:00 a.m., Saturday, January 11, 2020, at First Christian Church in Norfolk, 1408 E. Benjamin Ave., in Norfolk., with Pastor Tim DeFor officiating. Please join family and friends for lunch after the service to share stories. Sally passed away on October 11, 2019 in St. Petersburg, Florida. Stonacek Funeral Chapel in Norfolk is in charge of the arrangements. Sally Harmon Petersen lost her five-month battle to pancreatic cancer on the evening of Nov. 11, 2019, in St. Petersburg, Fla., with her family by her side. She was born and raised in Central City. She graduated from Central City class of 1966. She attended all the class reunions and was the “life of the party.” She married Chris Petersen on May 29, 1966, in Central City. They recently celebrated their 53rd wedding anniversary. Sally and her husband lived in Norfolk, where they started and operated their business, Telebeep, until 1998. They retired and moved to Indian Rocks Beach, Fla., for the next 21 years until her passing. She is survived by her husband, Chris Petersen; a daughter, Angela Petersen; her grandkids, Alex and Emma Rauss; a sister-in-law, Karen Carlson; a niece, Tami Scamehorn and family; and nephew Ron Carlson and family. She was preceded in death by her parents, Irene and Warren Harmon. Condolences may be expressed to the family online at www.stonacekfuneralchapel.com.

The family of Sally Jo Petersen created this Life Tributes page to make it easy to share your memories.

Send flowers to the Petersen family.