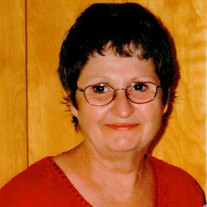 NORFOLK — Funeral services for Sandra K. Dieter, age 71, Norfolk, will be at 10:30 a.m. Thursday, January 17, at St. John's Lutheran Church in Norfolk. The Rev. Randy Rasmussen will officiate. Burial will be in Rose Hill Cemetery in Albion, NE. Visitation will be from 4:00 - 7:00 p.m. Wednesday, January 16, at Stonacek Funeral Chapel in Norfolk. She passed away Monday, January 14, 2019, at the Faith Regional Health Services in Norfolk. Born Dec. 11, 1947, in Fremont, Sandra Kay Dieter was the daughter of Lloyd and Geraldine (Stull) Keehn. She graduated from Albion High School in 1966. She went to work for Campbell’s Soup in Fremont. She then worked for Lindsay Manufacturing as a welder for 11 years. The family moved to Norfolk in 1986. Sandra also had worked at Herberger’s for 12 years. Sandra enjoyed raising flowers, gardening, cooking and bird watching. She married Dan Dieter on Dec. 15, 2008, at St. John’s Lutheran Church in Norfolk. She was a member of St. John’s Lutheran Church in Norfolk, the VFW Auxiliary and the Norfolk Eagles Club Auxiliary. Survivors include her spouse, Dan Dieter of Norfolk; her children, Mike and Kathy Tinker of Pierce, Robert Tinker of North Platte and Carrie (Dana) Moore of Battle Creek; her stepchildren, Karina Dieter of Norfolk, Mellisa Cruise of Lincoln and Haley Dieter of Norfolk; 10 grandchildren and seven great-grandchildren. She was preceded in death by her parents, Lloyd and Geraldine, and a brother, David. Pianist will be Steve Reinke with the congregational hymns “Rock Of Ages” and “Amazing Grace” being sung and recorded hymns “Go Rest High On That Mountain,” “Sunshine On My Shoulders” and “You Fill Up My Senses” being played. Julie and Ronda Johansen will sing “One Day At A Time”. Casket bearers will be her grandchildren: Tyler Tinker, Collin Tinker, Brett Tinker, Mason Moore, Alex Gunter, Jessica Gunter, Bailey Tinker and Bella Moore. Condolences may be expressed to the family online at www.stonacekfuneralchapel.com.

The family of Sandra K. Dieter created this Life Tributes page to make it easy to share your memories.

Send flowers to the Dieter family.