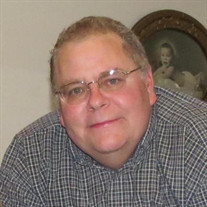 NORFOLK - Memorial service for Scott L. Mastny, 63, of Norfolk, will be held at 10:00 a.m., Thursday, October 22, 2020 at the Stonacek Funeral Chapel in Norfolk. Inurnment will be held at the Prospect Hill Cemetery, Norfolk. Visitation will begin one hour prior to the service on Thursday. Memorial service will also be held at 10:00 a.m., Wednesday, Oct. 21, 2020 at The Church of Christ in Anthon, Iowa. Scott died Saturday, October 3, 2020, at St. Joseph's Rehabilitation and Care Center in Norfolk. Stonacek Funeral Chapel in Norfolk is in charge of the arrangements. Scott Louis Mastny was born on September 9, 1957 to Al and Betty Mastny (Stroh) in Omaha, NE. The family moved to Norfolk in 1967 from Council Bluffs, IA where his parents had a meat business. He graduated from Norfolk High School in 1976. He was employed at Lynn & Al’s Grocery Stores in Norfolk and owned Groucho’s Records and Tapes with his brother, Tim. He then went to work for Lever Brothers Corporation as a salesman. He was also employed by Affiliated Foods until he opened his own grocery store, Corner Market in Anthon, IA. He owned and operated several businesses in Iowa including a convenience store in Anthon. He also owned and operated the Valley Drive Inn and Driftwood Pizza in Correctionville, IA. He traveled to Europe on vacations to visit friends and family. He also enjoyed cruises. He was integral in bringing Johnny Carson to Norfolk to speak at the class of 1976 Norfolk High School’s graduation. When Johnny Carson returned to Norfolk to film his NBC special, “Johnny Comes Home,” Scott had the opportunity to be Mr. Carson’s personal driver. He was very generous and outgoing. He enjoyed providing concert tickets and meals for his friends and family. He loved to go to movies with family and friends. He enjoyed spending time with his niece and nephews and their families when he could. He is survived his brother Tim and wife Dianna of Norfolk, his sister Becci and husband Jim Austin of Tucson, AZ, and his niece, Christi Austin Whatley and her husband Greg and their daughters, Kaylyn, Brielle, and Annabell, nephews Jeremy and his wife Marsha Austin, children Jonathan, Samuel, Elouise, and Lizzie, Troy Austin and his girlfriend Amy Henderson. He was preceded in death by his father and mother. Condolences may be expressed to the family on-line at www.stonacekfuneralchapel.com.

NORFOLK - Memorial service for Scott L. Mastny, 63, of Norfolk, will be held at 10:00 a.m., Thursday, October 22, 2020 at the Stonacek Funeral Chapel in Norfolk. Inurnment will be held at the Prospect Hill Cemetery, Norfolk. Visitation will... View Obituary & Service Information

The family of Scott L. Mastny created this Life Tributes page to make it easy to share your memories.

Send flowers to the Mastny family.