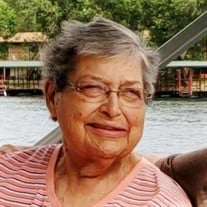 OSMOND -- A celebration of life honoring Sharilyn Kay Anderson-Lemke, 72, of Osmond, who departed our world on Thursday, April 29, 2021 at her residence in Osmond will be held at 6:00 p.m., Monday, May 3, 2021 at the Stonacek Funeral Chapel in Norfolk. Rev. Gordon Braun will be officiating. Private family burial will be held at a later date. Visitation with family present will be from 3:00-6:00 p.m., Monday, prior to the celebration of Sharilyn's life also at the Stonacek Funeral Chapel in Norfolk with a luncheon to follow. Stonacek Funeral Chapel in Norfolk is in charge of the arrangements. Sharilyn, whose family called her Sis, was born to Donald Aloise and Dorothy Anderson on August 29, 1948 in Cedar County. Her family later moved to a farm between Madison and Battle Creek. She attended the Little Red School House and Fairview Country School through 8th grade. She then attended Battle Creek High School where she graduated valedictorian of the class of 1966, balancing out the academic career of her future husband. Sharilyn went to Wayne State College, graduating in 1969 with a degree in Education with an emphasis in Home Economics and Physical Education. She married Gary Lemke, her high school sweetheart, on April 19, 1969. They have been a couple for 57 years! In the fall of 1969 they moved to Osmond, NE to begin their teaching careers. Sharilyn was a life-long educator, teaching home economics and physical education for 5 years, proctoring exams and registering extended campus classes for Northeast Community College, teaching GED classes, and subbing at Osmond and other area schools. Besides education, community and family were very important to Sharilyn. She was a member of the Women’s Club, the Lively Lassies Extension Club, and the Ladies Guild. Sharilyn was active with 4-H; she judged for numerous area fairs and served as a 4-H leader for her grandchildren. Family, especially her children and grandchildren, was the center of her world. Sharilyn and Gary are well known for making many trips to watch their grandchildren’s activities and performances. It was not out of the question for them to drive 6 hours round trip for a 15-minute science fair or concert, or 15 second track event. She also baked and decorated over 50 birthday cakes for her grandchildren as well as many more for friends and family (that’s a lot of frosting). Sharilyn and Gary also started the tradition of hosting a family vacation in Branson, MO that has resulted in 24 trips in 19 years. Sharilyn’s home reflects her hobbies of gardening, baking, and her collections of cookbooks and chicken décor. To many children of Osmond, Sharilyn was known as the “flower lady.” Sharilyn is survived by husband, Gary; daughter Melissa Lemke-Elznic and husband Jason of Winside, and their children Kassian Rye and Connor and his wife Rachel; daughter Michelle Lemke-Mohling and husband Ryan of Lincoln, and their children Merrick and Sena; her brother Rodney Anderson and wife Jeanette of Creighton; and sister-in-law Connie Anderson of Newman Grove. She is preceded in death by her parents, Don and Dorothy, and her brother Eldon. Memorials will be designated by the family and will include the Osmond Community Ambulance and other organizations that impacted Sharilyn’s life. Condolences may be expressed to the family on-line at www.stonacekfuneralchapel.com.

OSMOND -- A celebration of life honoring Sharilyn Kay Anderson-Lemke, 72, of Osmond, who departed our world on Thursday, April 29, 2021 at her residence in Osmond will be held at 6:00 p.m., Monday, May 3, 2021 at the Stonacek Funeral Chapel... View Obituary & Service Information

The family of Sharilyn K. Lemke created this Life Tributes page to make it easy to share your memories.

Send flowers to the Lemke family.