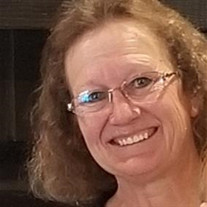 PIERCE -- Funeral service for Sheila M. Reed, 57, of Pierce will be held at 10:30 a.m., Friday, August 2, 2019 at the Zion Lutheran Church in Pierce with Rev. Gordon Bruce officiating. Interment will be at the Prospect View Cemetery, Pierce. Visitation will be 4:00-7:00 p.m., Thursday, at the Stonacek Funeral Chapel in Norfolk. She died Saturday, July 27, 2019 at the St. Joseph's Rehabilitation and Care Center in Norfolk. Stonacek Memorial Chapel in Pierce is in charge of the arrangements. Born Jan. 8, 1962, in Osmond, Sheila was the daughter of Clinton and Leonore (Long) Peterson. The Peterson family lived on the farm near McLean until 1964 then they moved to the farm south of Pierce. She attended a country grade school in rural Pierce before graduating from Pierce High School in 1980. Sheila moved to Norfolk after graduation. She married Byron Reed on Oct. 2, 1982, at the United Church of Christ in Pierce. The family moved back to the family farm south of Pierce in 1987, where they raised their family. Throughout her life, Sheila worked at Ryder’s, Truck Haven Café, Burger King and a McDonald’s restaurant in Norfolk for the last 26 years. Sheila loved to spend time outdoors, planting flowers, gardening and camping. She loved her chickens and cats. She was a member of Zion Lutheran Church in Pierce. Survivors include her spouse, Byron Reed of Pierce; her daughters, Amanda (Michael) Pick of Fordyce and Ashley (Jake) Jensen of Norfolk; her mother, Leonore Peterson of Norfolk; her sisters, Carolyn Grisom of California, Bette (Leon) Bilau of Gretna and Deborha Peterson of Norfolk; her mother-in-law, JoAnne Reed of Pierce; her sister-in-law, Connie Ziemer of Pierce; her brother-in-law, Kenny (Denise) Reed of Hoskins; her grandchildren, Braxsten, Keaten and Caseten Jensen, Colten, Aberley and Hadley Pick; many nieces, nephews, cousins, friends and loved ones. She was preceded in death by her father, Clinton Peterson; her sister, Peggy Braden; her father-in-law, Gerald Reed; and a brother-in-law, Dan Ziemer. Organist will be Dottie Ahlers. Casket bearers will be Jeremy Reed, Kyle Reed, Michael Ziemer, Brian Lackas, Michael Lackas and Jesse Jensen. Honorary casket bearers will be her grandchildren. Sheila requested family and friends to wear casual attire to the service. Condolences may be expressed to the family online at www.stonacekfuneralchapel.com.

PIERCE -- Funeral service for Sheila M. Reed, 57, of Pierce will be held at 10:30 a.m., Friday, August 2, 2019 at the Zion Lutheran Church in Pierce with Rev. Gordon Bruce officiating. Interment will be at the Prospect View Cemetery, Pierce.... View Obituary & Service Information

The family of Sheila M. Reed created this Life Tributes page to make it easy to share your memories.

Send flowers to the Reed family.