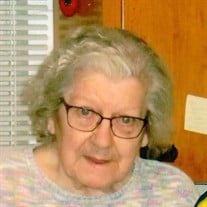 PIERCE -- Funeral service for Shirley H. Cederburg, 88, of Pierce will be held at 10:30 a.m., Tuesday, October 27, 2020 at Stonacek Funeral Chapel in Norfolk with Deacon John Mines officiating the service. Interment will take place at Hillcrest Memorial Park Cemetery in Norfolk. Visitation will be held from 4:00 - 7:00 p.m., Monday at Stonacek Funeral Chapel in Norfolk. Shirley died on Thursday, October 22, 2020 at the Premier Estates of Pierce. Stonacek Memorial Chapel in Pierce is in charge of arrangements. Shirley was born Dec. 18, 1931, in Walnut, to Lawrence and Helen (Frank) Sukup. She graduated from Verdigre High School. On Aug. 29, 1950, she married Robert Cederburg at Verdigre, after Robert returned from the service. The couple moved to Norfolk. To this union two son’s were born, Darrel and Gene. Shirley worked at Sunshine Food Market, Arrow Stage Line and Ranch Café over the years. She and Bob enjoyed making different woodcrafts and painting, going to garage sales and flea markets and reselling their treasures. Shirley had been at the Premier Estates at Pierce since December 2017. Survivors include two sons; Darrel (Carol) Cederburg of Norfolk and Gene (Diane) Cederburg of Pierce; two grandsons; Brandon Cederburg of Norfolk and Rollie (Michelle) Cederburg of Pierce; five great-grandchildren, one brother Dale Sukup of Verdigre; and many nieces and nephews. She was preceded in death by her parents, Lawrence and Helen; husband Robert; sister and brother-in-law Darlene and Jerry Costello; and one grandson Brian Cederburg. Music for the service will include recorded Hymns, “Amazing Grace,” “Green Green Grass Of Home” and “In The Garden.” Casket bearers will be Gene Cederburg, Darrel Cederburg, Rollie Cederburg, Brandon Cederburg, Payton Cederburg and Chloe Cederburg. Condolences may be expressed to the family online at www.stonacekfuneralchapel.com

The family of Shirley H. Cederburg created this Life Tributes page to make it easy to share your memories.

Send flowers to the Cederburg family.