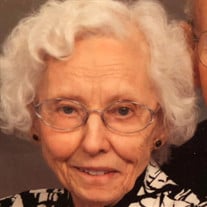 MADISON -- Memorial service for Shirley A. Renner, 89, of Parker, Colorado, formerly of Madison will be held at 10:30 a.m., Thursday, December 31, 2020, at St. Paul’s Lutheran Church in Norfolk with Pastor Paul Hirsch officiating the service. Burial will take place at Hillcrest Memorial Park Cemetery in Norfolk. Visitation will be held from 9:30-10:30 a.m., Thursday, prior to service time also at the church. Shirley died Sunday, December 6, 2020, at Pine Grove Crossing Memory Care in Parker, Colorado. Stonacek Funeral Chapel in Norfolk is in charge of the arrangements. Shirley A. Renner, the daughter of Julius and Ada (Beckman) Lafrenz, was born August 10, 1931, in Davenport, Iowa. She was baptized on August 30, 1931, and confirmed on March 25, 1945, at Holy Cross Lutheran Church in Davenport. She worked at Sieg Company in Davenport after graduating from Davenport High School on June 9, 1949. She married Leonard Renner on June 13, 1959, in Bettendorf, Iowa. After marriage, Shirley joined Leonard on the farm in rural Madison. She was a housekeeper and enjoyed raising her children and spending as much time with her family as she could. She was an avid baker and enjoyed trying new recipes. She had a special fondness for LWMS and loved attending rallies and national conventions. She was a resident of Countryside Home in Madison from March 2017- June 2019 and then a resident of Pine Grove Crossing Memory Care in Parker, Colorado, from June 2019 until the time of her death. She was a member of St. Paul’s Lutheran Church in Norfolk, Nebraska. Survivors include her daughters, Judie (Terry) Martinson of Cedar Rapids, Iowa, and Becki (Tom) Seidl of Elizabeth, Colorado; a son, Mark (Sharon) Renner of Rochester, Minnesota; 10 grandchildren, Jesse and Tracie Martinson, Benjamin, Elizabeth and Matthew Seidl, Emily (Aaron) Kristopeit and Steven, Katie, Kevin and Samuel Renner; one sister, Audrey (Walter) Biberdorf and numerous nieces and nephews. She was preceded in death by her husband Leonard; her parents, Julius and Ada, and her sister and brother-in-law Ida Mae and Marlo Dorn. Honorary pallbearers will be Benjamin Seidl, Matthew Seidl, Jesse Martinson, Steven Renner, Kevin Renner and Samuel Renner. Memorials may be made to Nebraska Lutheran High School or St. Paul’s Lutheran Church TV and Radio Fund. Condolences may be expressed to the family on-line at www.stonacekfuneralchapel.com.

The family of Shirley A. Renner created this Life Tributes page to make it easy to share your memories.

Send flowers to the Renner family.