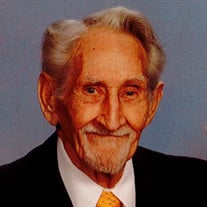 NORFOLK -- Funeral service for Siegfried H. "Zeke" Brauer Jr., 94, of Norfolk will be held at 1:30 p.m., Tuesday, May 11, 2021 at Stonacek Funeral Chapel in Norfolk. Officiating the service will be Rev. Arin Hess and Rev. Stephen Miller. Burial will take place at New Lutheran Cemetery in Norfolk. Visitation will be held from 12:00 p.m. till service time on Tuesday. Military rites will be conducted by the American Legion Post #16, V.F.W. Post #1644, and the United States Navy Honors Guard. Zeke passed away on Sunday, May 2, 2021 at the Faith Regional Hospital in Norfolk. Stonacek Funeral Chapel in Norfolk is in charge of the arrangements. Zeke was born in Ft. Wayne, IN on April 23, 1927 to Siegfried and Mamie “Pauline” (Carter) Brauer Sr. They later moved to Norfolk, NE where he grew up. He enlisted in the Navy on April 3, 1945 and served until July 23, 1946. After returning from duty, he married the love of his life, Della McKeown, on December 29, 1946 at Grace Lutheran Church in Norfolk. They raised their family on a ranch north of Stuart, NE until 1967. In the late 1950’s he began working for the Nebraska School Improvement Association. He was Executive Secretary and a lobbyist in the State Legislature for the NSIA for 30 years. The family moved to Lincoln in 1967 where they lived for 26 years before returning to Norfolk in 1993. Zeke attended Community Bible Church and was a member of the American Legion since 1946. He always cherished his time with family and his time on the ranch with his “angus “cattle and quarter horses. In later years he took great pride in his vegetable and flower gardens. Survivors include his spouse Della Brauer of Norfolk, children Siegfried H. (Kendra) Brauer III of Kearney, Kathy (Dan) Karmazin of Norfolk, Deborah (Roger) Koertner of Fremont, Teresa (Jim) Klein of Lincoln, David (Deena) Brauer of Lincoln, Sandra (John) Cherry of Omaha, 19 grandchildren, 26 great-grandchildren, sister Virginia Raasch of Norfolk, and sister-in-law Charlene Brauer of Norfolk. He was preceded in death by his parents Siegfried Sr. and Pauline, brothers Richard and Albert. Pianist will be Anne Marie Hess. Casket bearers will be his grandson’s Sieg Brauer, Corey Karmazin, Steve Karmazin, Seth Koertner, Nathan Koertner, Randy Baylor, Jeff Klein, Nick Brauer, Caleb Cherry, and Josiah Cherry. The family requests that memorials be directed to Della Brauer for a later designation. Condolences may be expressed to the family on-line at www.stonacekfuneralchapel.com.

The family of Siegfried H. "Zeke" Brauer Jr. created this Life Tributes page to make it easy to share your memories.

Send flowers to the Brauer family.