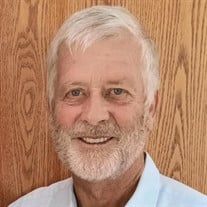 STANTON -- Funeral service for Stephen M. Ronnebaum, 68, of Stanton will be held at 11:00 a.m., Saturday, February 19, 2022 at the Stonacek Funeral Chapel in Norfolk. Rev. Terry Buol will be officiating the service. Private family inurnment will be held at a later date, at the family farm in Seneca, KS. Visitation will begin 1 hour prior to the service also at Stonacek Funeral Chapel on Saturday. Stephen passed away unexpectedly at his daughter's home in St. George, Kansas on Friday, February 11, 2022. The service will be live-streamed on the Stonacek Funeral Chapel website at https://www.stonacekfuneralchapel.com/obituaries/Stephen-Ronnebaum/#!/PhotosVideos. Stonacek Funeral Chapel in Norfolk is in charge of the arrangements. Steve was born September 2, 1953, in Axtell, Kansas to Werner & Lorena (Mohrman) Ronnebaum. He was raised in Seneca, Kansas, where he attended Saints Peter & Paul Catholic School, graduating in 1971. He attended Atchison Vo Tech where he earned a drafting degree. On October 20, 1973, he married Karlene Deters. He worked for the State of Kansas as a draftsman in the mid-1970s, designing several Kansas highways. He and Karlene returned to Seneca, Kansas, to start a family. Together they had three children Jill, Sara, and Jared. During his time in Seneca, he worked for Love & Osterhaus as a carpenter and repaired tractors at Seneca Implement and later Henry Brothers. In 1990 he moved to Plainview, Nebraska, to work for the State of Nebraska Department of Roads as a surveyor, retiring as a highway designer in 2017. He married Patricia Fluckey on November 9, 1991, and added her two daughters, Jennifer and Julie, to the family. They lived in Plainview, Nebraska until May 2008. They built a home in Stanton, NE where he resided until his death. Steve spent his retirement helping others with farm work and house projects, gardening, and playing cards with his grandkids. He enjoyed being outside, even if it was work. He loved to fish and camp. Gardening was another favorite activity. In the spring he looked forward to picking wild asparagus and hunting mushrooms. Summers were spent planting, picking, and weeding in his garden. His wife would say that “a weed didn’t dare grow in Steve’s garden.” He spent the fall and winter working with wood. He was cutting and splitting it up to the day he died. Although the saw dust would bother him later in life, he enjoyed crafting and shaping many pieces of furniture, picture frames, and household items. He loved spending time with his family. He will be remembered for his story telling and playing UNO and other card games, especially with his grandchildren. Steve regularly helped his kids, his siblings, or his in-laws with any home improvement projects. He was never afraid of hard work. Anyone who knew him, knew how ornery he could be. Siblings would tell tales of pranks. His children and grandchildren would attest to his teasing and “leg-pulling”, giggling at his tall tales. He was knowledgeable on almost every kind of construction, woodworking, and engines. His advice was often sought out by his son and sons-in-law. He is survived by his wife Patricia (Frahm) Ronnebaum of Stanton, NE; children, Jill (Dan) Holt of St. George, KS; Sara (Mike) Bourek of North Bend, NE; Jared (Ashley) Ronnebaum of Crete, NE; Julie (Aaron) Fletcher of Hershey, NE; son-in-law Jerry Brungardt of Norfolk; grandchildren, Dillon Bourek of Lincoln, NE; Kory Bourek of Norfolk, NE; Karlene Bourek; Brandon, Carter, and Emily Holt; Ayla and Ansley Ronnebaum; Jesie (Cora) Kohl of Norfolk, NE; Joshua (Kelsie) Kohl of Browns Mill, NJ; Logan and Noah Fletcher; great-grandchildren, Lucas Bourek, Jesika and Kimberlyn Kohl; siblings Donna (Tim-deceased) Sasser of Ashton, MD; Dan Ronnebaum of Seneca, KS; Jean (Scott) Covey of Heritage, MO; Dave (Sherry) Ronnebaum of Axtell, KS; Bill (Becky) Ronnebaum of Seneca, KS; Kathy (John) Welch of Topeka, KS; Mary (Mike) Sack of Seneca, KS; Joan (Lawrence) Davis of Lenexa, KS; John (Noel) Ronnebaum of Augusta, KS; Laurie (Joe) Fangman of St. Joseph, MO; and Cheri (Bob) Deters of Seneca, KS; mother-in-law Aggie Frahm of Chambers NE, brothers-in-law Doug (Mary) Frahm of Amelia, NE, Greg (Pam) Frahm of Emerson, NE, sisters-in-law Karen Sue (Kevin) Shaffer of Prescott, AZ, Kathy Frahm of Blair, NE, and numerous nieces, nephews, extended family and friends. Steve was preceded in death by parents Werner & Lorena Ronnebaum, wife Karlene (Deters) Ronnebaum; brother Michael Ronnebaum; stepdaughter Jennifer Brungardt; step-grandson Joel Fletcher; father-in-law Heinrich Frahm; Father and mother-in-law Lawrence and Rachel (Rettele) Deters; and brothers-in-law Tim Sasser and Dan Frahm. Pallbearers are Jared Ronnebaum, Dan Holt, Aaron Fletcher, Mike Bourek, Dillon Bourek, and Kory Bourek. Memorials can be made to the family for future designation. Condolences may be expressed to the family on-line at www.stonacekfuneralchapel.com.

The family of Stephen M. Ronnebaum created this Life Tributes page to make it easy to share your memories.

Send flowers to the Ronnebaum family.