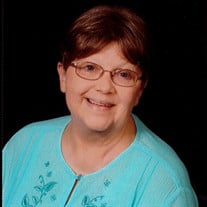 PIERCE -- Memorial service for Susan W. "Sue" Brodhagen, 72, of Pierce will be held a 10:30 a.m., Friday, February 11, 2022 at Zion Lutheran Church, Pierce. Rev. Gordon Bruce and Vicar Chad Berg will be officiating the service. Inurnment will take place at Zion Lutheran Cemetery, rural Pierce. Sue passed away on Monday, February 7, 2022 at the Faith Regional Hospital in Norfolk. Stonacek Memorial Chapel is in charge of the arrangements. Sue was born on August 11, 1949 to Gilbert and Leota (Wheeler) Frahm in Osmond, Nebraska. She was baptized and confirmed at St. Mark’s Lutheran Church in Bloomfield. Sue graduated from Bloomfield High School in 1967. After school Sue moved to Pierce and began working for Dale/Vishay Electronics in Norfolk in 1967. She worked in both the Columbus and Norfolk plants until she retired in 2015. Sue married David Brodhagen on July 19, 1969 at the Zion Lutheran Church in Pierce. After marriage, the couple lived in Pierce. She enjoyed fishing, gardening, hunting, staying at the cabin in Lynch, road trips, football, and in her later years she enjoyed crafts to keep herself busy. Those that knew Sue would say she was giving, loving, generous, devoted, and enjoyed telling a good joke. Sue was a member of Zion Lutheran Church in Pierce, LWML, and Wednesday lady’s bible study. Survivors include her brothers, Bryan (Robin) Frahm of Lyons, her sister-in-law’s, Linda Frahm of Ponca and JoAnne (Kermit) Benshoof of Norfolk, two nephews Jesse (Nicole) Frahm of Lyons and Jason (anna) Frahm of Lyons, adopted families Katie (Taylor) Reeves of Battle Creek, Mary Wragge and Jesse Wragge of Pierce, and all her close friends and neighbors. Sue was preceded in death by her husband David in 2018, her two children in infancy Sheila Sue and Paul David, her parents Gilbert and Leota, brother Alan Frahm, sister Diane Doeden, father-in-law and mother-in-law Arnold and Irene Brodhagen, and nephew Lucas Doeden. Condolences may be expressed to the family on-line at www.stonacekfuneralchapel.com.

The family of Susan W. "Sue" Brodhagen created this Life Tributes page to make it easy to share your memories.

Send flowers to the Brodhagen family.