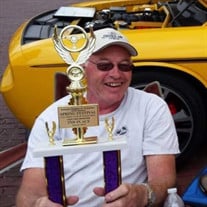 NORFOLK – Private funeral service for Thomas Dean “Tom” Brenneman, 65, of Norfolk will be held Friday, May 29, 2020 at the Grace Lutheran Church in Norfolk with Rev. Chris Asbury officiating. Public interment will be held at 11:30 a.m., at the Prospect View Cemetery, Pierce. Public visitation without the family present will be held 5:00-7:00 p.m., Thursday, at the Stonacek Funeral Chapel in Norfolk. Tom passed away on Monday, May 25, 2020 at his residence in Norfolk. Stonacek Funeral Chapel in Norfolk is in charge of the arrangements. Tom was born on May 13, 1955 to James “Jim” and Cleone (Janssen) Brenneman in Norfolk, NE. Tom was baptized and confirmed at Grace Lutheran Church in Norfolk. Tom graduated from Norfolk Senior High in 1973 and Northeast Community College. Tom married Lois Ann Bockelman on April 3, 1976 at Christ Lutheran Church in Pierce. Tom worked as a firefighter for the Norfolk Fire Department and also a certified rescue dive team. Tom became a registered nurse and worked in the emergency room at Faith Regional Health Services. He also worked as a nurse at Urgent Care as well as being an x-ray tech. Tom finished his nursing career at the Surgi-Center in Norfolk. Tom loved being a nurse, listening to his patients and taking wonderful care of his patients was his passion. He was a proud owner of a 1937 Ford Coupe which he loved to show off at car shows. He loved to fish, hunt, boat, and fix anything that needed fixing. Tom loved being a grandpa to his grandson and spending as much time as he could with his family. Tom was a member of the Grace Lutheran Church in Norfolk. Survivors include spouse of 44 years Lois Brenneman of Norfolk, daughter Heidi Brenneman (special friend Travis) of Pierce and grandson Sean, son Andrew Brenneman (special friend Alicia) of Norfolk, mother Cleone Brenneman of Norfolk, siblings Connie (Paul) Bichlmeier of Norfolk, Daniel “Butch” (Colleen) Brenneman of Gretna, Sherri Aldag of Norfolk, and Karen Brenneman of Norfolk, and nieces and nephews. He was preceded in death by father James “Jim” Brenneman, grandmother Esther Janssen, grandparents Walter and Helen Brenneman. Casket bearers will be Jay Aldag, Travis Aldag, Dalton Bichlmeier, Parker Brenneman, Jim Prahl, and Dan Brenneman. Honorary casket bearers: Sean Monroe, Travis Monroe Jr., Kendra Barnts, Kyleigh Barnts, Kelsey Barnts, and nieces and nephews. Condolences may be expressed to the family on-line at www.stonacekfuneralchapel.com.

NORFOLK &#8211; Private funeral service for Thomas Dean &#8220;Tom&#8221; Brenneman, 65, of Norfolk will be held Friday, May 29, 2020 at the Grace Lutheran Church in Norfolk with Rev. Chris Asbury officiating. Public interment will be held at... View Obituary & Service Information

The family of Thomas D. "Tom" Brenneman created this Life Tributes page to make it easy to share your memories.

Send flowers to the Brenneman family.