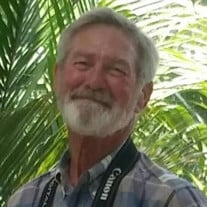 PIERCE —Memorial services for Thomas E. “Tom” Tunink, 73, Elizabeth, Colo., formerly of Pierce, will be at 10 a.m. Saturday, July 13, at St. Joseph’s Catholic Church in Pierce. The Rev. Tim Forget and Doug Tunink will officiate. Inurnment will be in the parish cemetery in rural Pierce. Military rites will be conducted by American Legion Tomek-Otto Post 72, U.S. Air Force Honors Guard and the Nebraska American Legion Riders. Visitation will be 4-7 p.m. Friday at the church with a 7 p.m. rosary. He died Monday, July 1, 2019, at Comanche County Hospital in Cold Water, Kan., from a motorcycle accident. Memorials are directed to St. Joseph’s Indian School in Chamberlain, S.D. Arrangements are under the direction of Stonacek Memorial Chapel in Pierce. 1946-2019 Thomas E. “Tom” Tunink was born May 10, 1946, in McLean, the son of Eugene and Dorthy (Martischang) Tunink. He served in the U.S. Air Force from May 25, 1966, to March 24, 1970. He married Sandra Magdanz in 1967. They later divorced. He married Diane Raeside of Norfolk, and they later divorced. Tom, throughout his life, lived in Nebraska, Louisiana, Texas and Colorado. He worked for Kenning and Reil and RK and Sons. He started his own business as Double T Balancing until the time of his death. Tom served six years on the National Environmental Balancing Bureau National Testing, Adjusting and Balancing (TAB) Committee from November 2012 until October 2018. He had been the Rocky Mountain National Environmental Balancing Bureau (RMNEBB) technical director since around 2008 and was co-director since around 2000. Tom was one of the “Originals” in Colorado, and everybody in the industry respected Tom. Tom achieved TAB supervisor certification in 1983 and co-owned Double T Balancing since 1986. Tom started doing TAB in 1977 while being a Union Sheet Metal from 1965. Tom was a long time RMNEBB board member and you would see him at every NEBB National Conference. He also worked part time in the summers and Halloween at Tagawa Nursery for six years. Tom loved working outside, growing his houseplants and riding his motorcycle. He coached soccer for many years. He loved visiting his family and was a member of St. Francis of Assisi in Castlerock, Colo. Survivors include his children, Lisa (John) Hoeppner of Pierce, Curt (Kirsten) Tunink of Aurora, Colo., Scott Tunink of Pierce, Nicole Tunink and fiancé Jeremy Scurlock of Englewood, Colo., Natalie Tunink of Castlerock, Colo.; his grandchildren, Hailey Rutherford, Cassidy Tunink, Taren Tunink and Kole Tunink; and his great-grandchildren, Leia, Ezra, Kai Guyton and Jaxson Tunink, sister Doris (Douglas) Zakroczynski of Elberton, GA. He was preceded in death by his parents, Eugene and Dorthy Tunink. Music will be provided by organist Linda Peekenschneider and soloist Nan Jansen singing “Be Not Afraid,” “Lord Is My Shepherd,” “Amazing Grace,” “Ave Marie” and “On Eagle’s Wings.” Online condolences may be sent to www.stonacekfuneralchapel.com.

The family of Thomas E. "Tom" Tunink created this Life Tributes page to make it easy to share your memories.

Send flowers to the Tunink family.