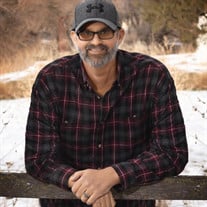 PIERCE — Funeral service for Travis Gardner, 39, Pierce, will be held at 10:30 a.m. Monday, Jan. 25, 2021 at the Zion Lutheran Church in Pierce. Private inurnment will be at a later date in Prospect View Cemetery in Pierce. The Rev. Gordon Bruce and Travis Henry will officiate. Visitation will be 4-6:00 p.m., Sunday also at the church. The funeral service will be live-streamed on the Stonacek Funeral Chapel Facebook page. He passed peacefully on Wednesday, January 20, 2021, at his home in Pierce after a 2 year battle with cancer. Stonacek Memorial Chapel in Pierce is in charge of the arrangements. Travis was born on December 25, 1981 to Kimberly (Bowling) and Randy Gardner. He lived around the Pierce Nebraska area his entire life and attended Pierce Elementary and High School. He graduated from Pierce High School in 2001 and has had many lifelong friends. Travis married Sara Habrock on August 26, 2006. They had two daughters, Shaylee and Cailyn. Travis worked in the factory industry throughout his adult life; most recently at Continental ContiTech in Norfolk, NE. Travis was a devoted father and husband. He loved the outdoors and was an avid hunter. He enjoyed teaching his daughters ways to be self-sufficient and spending time with friends and family. His last summer, he made many memories with his family camping and hunting with his oldest daughter Shaylee. Travis was always willing to lend a hand to anyone. He also loved football, especially the Nebraska Cornhuskers and followed the Pierce Blue Jays. He will forever be cherished by surviving family members and friends: Wife Sara and daughters Shaylee and Cailynn, mother, Kimberly Gardner and friend Lee Roy, sister Megan and Bryce Olsen, father-in-law Warren Habrock and friend Deb, sister-in-law Christa and Justin Dutcher, nieces and nephew Sydney, Bailey, Karsen, Mckennah, Hannah, Anna, Kiley, and Luke, grandparents Del and Lonnie Gardner, along with many other family members and friends. Travis is preceded in death by his father, Randy Gardner, mother-in-law Carol Habrock, aunt Cristie Green, and grandparents Marlene (Buhrman) and Phillip Jr. Bowling. Pallbearers will be Trevor Bauer, Josh Kirstine, Jason Walton, Brandon Brown, Luke Korting, and CJ Woslager. Condolences may be expressed to the family on-line at www.stonacekfuneralchapel.com.

PIERCE &#8212; Funeral service for Travis Gardner, 39, Pierce, will be held at 10:30 a.m. Monday, Jan. 25, 2021 at the Zion Lutheran Church in Pierce. Private inurnment will be at a later date in Prospect View Cemetery in Pierce. The Rev. Gordon... View Obituary & Service Information

The family of Travis Gardner created this Life Tributes page to make it easy to share your memories.

Send flowers to the Gardner family.