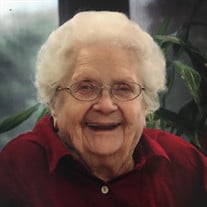 OSMOND -- Funeral service for Vlasta A. "Pat" Wagner, 98, of Osmond will be held at 10:30 a.m., Wednesday, October 31, 2018 at the St. Mary's Catholic Church in Osmond with Father Tim Forget officiating. Interment will be in the Parish cemetery, Osmond. Visitation will be 5:00-7:00 p.m., Tuesday, also at the St. Mary's Catholic Church in Osmond, with the Rosary beginning at 7:00 p.m. also at the church. Pat died Saturday, October 27, 2018 at the Colonial Manor in Randolph. Stonacek Memorial Chapel in Osmond is in charge of the arrangements. Vlasta A. “Pat” Wagner, the daughter of Joseph and Marie (Jelinek) Forman, was born Nov. 15, 1919, in Verdigre. She attended Verdigre Public School to the eighth grade. Pat worked at Blackstone Restaurant and Hotel in Omaha, where she received her name “Pat.” Since that time, she has always been known as Pat. She married Ivan G. Wagner on Jan. 31, 1951, at St. Wenceslaus Catholic Church in Verdigre. After they were married, they lived north of Osmond and farmed. She was a homemaker and a cook. After retiring from farming, they moved to Osmond. Ivan died July 31, 2011. Pat had been a resident of Colonial Manor in Randolph since 2011. She enjoyed puzzles, baking and making kolaches. She was a member of St. Mary’s Catholic Church in Osmond, the Christian Mothers and the Altar Guild. Survivors include two sons, Doug Wagner of Wayne and Dave and spouse Jolene Wagner of Columbus; six grandchildren and nine great-grandchildren. She was preceded in death by her spouse, Ivan; her parents, Joseph and Marie; two sons, Tom and Phil; a daughter-in-law Mary Ann Wagner; two brothers, Emil and Joe; two sisters, Mamie Frank and Olga Uhlir; Music will be provided by organist, Sue Wingert, and the St. Mary’s Choir. Hymns will be “Here I Am Lord,” “Amazing Grace,” “Be Not Afraid,” “On Eagle’s Wings” and “How Great Thou Art.” Casket bearers will be Walt Wagner, Travis Jelken, Noah Jelken, Justin Polak, Phil Westrom and Paul Leiting. Condolences may be expressed to the family online at www.stonacekfuneralchapel.com.

OSMOND -- Funeral service for Vlasta A. "Pat" Wagner, 98, of Osmond will be held at 10:30 a.m., Wednesday, October 31, 2018 at the St. Mary's Catholic Church in Osmond with Father Tim Forget officiating. Interment will be in the Parish cemetery,... View Obituary & Service Information

The family of Vlasta "Pat" A. Wagner created this Life Tributes page to make it easy to share your memories.

Send flowers to the Wagner family.