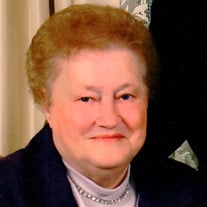 NORFOLK -- Funeral service for Wanda A. Beeks, 84, of Norfolk will be held at 10:30 a.m., Monday, February 17, 2020, at Stonacek Funeral Chapel in Norfolk. Officiating the service will be Reverend Steve Lund. Burial will take place at Prospect View Cemetery, rural Pierce. Visitation will be held from 2:00 - 5:00 p.m., Sunday, at Stonacek Funeral Chapel in Norfolk. Wanda died Wednesday, February 12, 2020 at the St. Joseph's Rehabilitation and Care Center in Norfolk. Stonacek Funeral Chapel in Norfolk is in charge of the arrangements. Wanda A. Beeks was born June 18, 1935, in Pierce, the daughter of William and Tillie (Brozech) Wragge. She attended rural Pierce schools, graduating from Pierce High School in 1952. She was baptized on Aug. 4, 1935, at Christ Lutheran Church in Pierce. After graduating high school in 1952, Wanda worked at the Pierce County Assessor’s Office until 1955. She married Robert D. Beeks on Oct. 7, 1955, at Christ Lutheran Church in Pierce. After their marriage, they moved to Wayne, and she worked for the City Clerk’s office until 1964 when they moved to Norfolk. In Norfolk, she worked for Eugen C. Stortvedt CPA for 20 years doing bookkeeping and income tax. After his retirement, she went to work at Supertel Hospitality Inc. as bookkeeper and worked her way up with the company as vice president of accounting and auditing. In 1999, she started working as secretary for Stonacek Funeral Chapel. Wanda always said her life was full as she achieved everything she wanted, a loving husband, great and loving son (Rodney), four grandchildren and seven great grandchildren. Her love of her job was at Supertel, before dying was to work in a funeral home and she too achieved this. She was a member of St. John’s Lutheran Church, Norfolk. Survivors include a son Rodney Beeks of Norfolk, four grandchildren Travis (Hollie) Beeks of Norfolk, Miranda Williams of Wesley Chapel, Fla., Cassie Beeks of Miss., Bobby Beeks of Fort Collins, Colo.,; seven great-grandchildren Landyn Powell, Lainey Powell, Dominick Powell, Treyton Christiansen, Trinity Christiansen, Dylan Grebel and Serenity Beeks. She was preceded in death by her spouse, Robert, who died March 23, 2007; parents, William and Tillie; two brothers, Elmer and William; five sisters, Erna Ordway, Gladys Koehler, Luella Bockelman, Fern Buol and Marge Herbolsheimer. For the service, Marsha Burke will be the organist. Richard Hillrichs will be the soloist. Casket bearers are Rodney Beeks, Travis Beeks, Miranda Williams, Cassandra Beeks and Robert Beeks. Honorary casket bearers are Michelle Clark, Audrey Frickel, Brian Beeks; special friends Diane and Lenny Haines, Paul and Karen Schulte and LaVerne Munson. Condolences may be expressed to the family on-line at www.stonacekfuneralchapel.com.

NORFOLK -- Funeral service for Wanda A. Beeks, 84, of Norfolk will be held at 10:30 a.m., Monday, February 17, 2020, at Stonacek Funeral Chapel in Norfolk. Officiating the service will be Reverend Steve Lund. Burial will take place at Prospect... View Obituary & Service Information

The family of Wanda A. Beeks created this Life Tributes page to make it easy to share your memories.

Send flowers to the Beeks family.