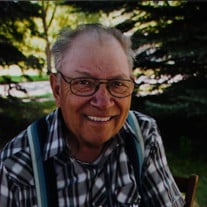 PIERCE — Services for Wayne M. Gnewuch, 83, Pierce, will be at 1:30 p.m. Monday, Jan. 21, at Zion Lutheran Church in Pierce. The Rev. Gordon Bruce and Joshua Mork will officiate. Burial will be at Prospect View Cemetery in rural Pierce.Visitation will be from 10 a.m. until noon Monday at the church. He died Tuesday, Jan. 15, 2019, at Faith Regional Health Services in Norfolk. Stonacek Memorial Chapel in Pierce is in charge of the arrangements. The son of Melvin Eric John and Lorena (Dossow) Gnewuch was born May 3, 1935, in Knox County. He was baptized at Trinity Lutheran Church in Bloomfield and also confirmed there in 1949. He grew up in Bloomfield. The family moved to Plainview when Wayne was 16. He married Elizabeth Seegebarth on June 3, 1958, at Immanuel Lutheran Church in Hadar. Wayne worked at the Plainview Creamery for 40 years. They moved to Pierce in 2001. Wayne enjoyed playing pool, golf, pitch, working and fixing things in his workshop and was a lifetime Chicago Cubs fan. Wayne enjoyed traveling over the years and attending the grandchildren’s activities. He was a member of Zion Lutheran Church in Pierce. Survivors include his spouse, Elizabeth of Pierce; his children, Brian (Sherri) Gnewuch of Edmond, Okla., Angela (Greg) Kaschke of Pierce, Nancy (Leon) Kotrous of Lee’s Summit, Mo., and Gwen (Brian) Porter of Pierce; nine grandchildren and 11 great-grandchildren. He was preceded in death by his parents, Melvin and Lorena; a brother, Richard; and a sister, Sharon Cox. Organist will be Dottie Ahlers with Karen Coolidge and Gary Erickson singing “It Is Well With My Soul.” Congregational hymns will be “Abide With Me,” “I know That My Redeemer Lives” and “How Great Thou Art.” Casket bearers will be Sam Kaschke, Caden Porter, Bryce Jarzynka, Marc Linn, Chad Wiswell and Jim Stevens. Honorary casketbearers will be Andrea Kotrous, Star Kotrous, Jennifer MK Wiswell, Cassie Jarzynka, Sean Tonniges, Heather Tonniges, Ashley Carey, Aaron Soward and Allison Soward. Online condolences may sent to www.stonacekmemorialchapel.com.

PIERCE &#8212; Services for Wayne M. Gnewuch, 83, Pierce, will be at 1:30 p.m. Monday, Jan. 21, at Zion Lutheran Church in Pierce. The Rev. Gordon Bruce and Joshua Mork will officiate. Burial will be at Prospect View Cemetery in rural Pierce.Visitation... View Obituary & Service Information

The family of Wayne M. Gnewuch created this Life Tributes page to make it easy to share your memories.

Send flowers to the Gnewuch family.