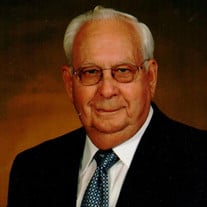 NORFOLK -- Private funeral service for William A. "Bill" Greenough, 94, of Norfolk will be held on Tuesday, May 26, 2020 at Stonacek Funeral Chapel in Norfolk with Rev. Donna Goltry officiating. Public graveside service will be held at 11:30 a.m., Tuesday at the Hillcrest Memorial Park Cemetery, Norfolk. The graveside service and funeral service will both be streamed on the Stonacek Funeral Chapel Facebook page. Public visitation without the family present will be 5:00-7:00 p.m., Monday, May 25 at the Stonacek Funeral Chapel in Norfolk. Bill passed away on Wednesday, May 20, 2020 at the St. Joseph's Care Center in Norfolk. Stonacek Funeral Chapel in Norfolk is in charge of the arrangements. Bill was born on December 21, 1925 to Earl and Stella (Cline) Greenough near Soldier, IA and he was raised on the farm there. He attended school in rural Monona County and Soldier, Iowa. He moved to the Mapleton, IA area in 1942 and farmed with his father. He married Ellen Sands in 1944 and moved to Sioux City, IA where Bill worked for Farmers Lumber and Supply. He then went to work for International Milling Company and delivered flour. He was quickly promoted to the sales force. Later, he transferred to the Norfolk area. Bill and Ellen adopted Anita, Bill, and Mary. They then had a son Jeffrey who passed away when he was 2 years old. Jerald was born soon after. Bill and Ellen later divorced. In 1966 he married Joyce Wilcox. To this union, son Faron was born. Joyce had four children, Steve, Marlea, Tamara, and Kevin. Bill worked with International Multifoods as a territory manager for 35 years until he retired in 1986. Bill spent a lifetime buying, selling, and trading, horses and tack. Every customer became a life-long friend. His family was his pride and joy, and he made sure everyone knew that! Bill was a member of the Westridge United Methodist Church for over 50 years, and he was a former member of the Norfolk Saddle Club. Survivors include spouse Joyce Greenough of Norfolk, children Anita Clyde of Norfolk, William (Judy) Greenough of Norfolk, Mary (John) Kringel of Hickman, Jerald “Jed” (Diane) Greenough of Dannebrog, Faron (Cari) Greenough of Kearney, Marlea Wilcox of Norfolk, Kevin Wilcox of Denver, CO, son-in-law Ron Klein of Broken Bow, 19 grandchildren, numerous great and great-great grandchildren, brother Larry (Deloris) Greenough of Spencer, IA. He was preceded in death by his parents, infant son Jeffrey Greenough, son Steven Wilcox, daughter Tamara Klein, 2 sisters Evelyn Fritz and Irene Freerking, 2 brothers Robert Greenough and Kenneth Greenough. Casket bearers are Kerry Eucker, Jared Klein, Jacob Klein, Jami Klein, Trevor Greenough, Blaine Greenough, Joe Greenough, Bryan Greenough, Caleb Greenough, and Jacob Greenough. Condolences may be expressed to the family on-line at www.stonacekfuneralchapel.com.

NORFOLK -- Private funeral service for William A. "Bill" Greenough, 94, of Norfolk will be held on Tuesday, May 26, 2020 at Stonacek Funeral Chapel in Norfolk with Rev. Donna Goltry officiating. Public graveside service will be held at 11:30... View Obituary & Service Information

The family of William A. "Bill" Greenough created this Life Tributes page to make it easy to share your memories.

Send flowers to the Greenough family.