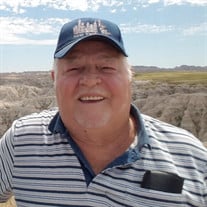 NORFOLK -- Funeral service for William "Ed" Humphrey, 78, of Norfolk will be held at 10:30 a.m., Tuesday, April 30, 2019 at the First United Methodist Church in Norfolk with Rev. Rai Drake officiating. Interment will be at the McCoy Cemetery, rural Meadow Grove. Visitation will be 4:00-7:00 p.m., Monday, at the Stonacek Funeral Chapel in Norfolk. Ed died Friday, April 26, 2019 at the Faith Regional Hospital in Norfolk. Born Oct. 9, 1940, in Meadow Grove, he was the son of George and Eula (Halsey) Humphrey. He graduated from Meadow Grove High School in 1958. He served in the U.S. Air Force from 1960 to 1964. He married Janis Daniel in September 1976 at First United Methodist Church in Norfolk. To this union, Ed and Jan had one son, Matt. They later divorced. Ed worked at Nucor Steel for almost 20 years as a crane operator until retirement in 2002. Ed had many hobbies, such as being an avid golfer and bowler. He enjoyed playing softball, was a dedicated Husker fan, played guitar and sang in several local country bands. He very much enjoyed going to concerts, as well as the Madison County Fair with his son, Matt. Ed was always a person to count on, and he always offered a helping hand to anyone. He was a member of American Legion Post 170. Survivors include a son, Matthew Humphrey of Meadow Grove; his former spouse, Jan of Meadow Grove; his siblings, Joyce Albers of Norfolk, Walt (Linda) Humphrey of Norfolk, Gene (Kathy) Humphrey of Battle Creek, Barb “Janelle” (Mike) Hoover of Norfolk, John (Mary) Humphrey of Meadow Grove, Kay (Dan) Anderson of Norfolk, Larry Humphrey of Meadow Grove, Donna (Terry) Bayne of Norfolk, Norma Humphrey of Norfolk and Roger Humphrey of Norfolk; and numerous nieces and nephews and countless friends. He was preceded in death by his parents, George and Eula, and his sisters, Evelyn Cessna, Betty Bowers and Linda Humphrey. Organist will be Betty Frank with the musical selections “How Great Thou Art” and “Amazing Grace.” Casketbearers are Tyler Bayne, Brandi Lanman, Nick Humphrey, Travis Humphrey, Ryan Johnson and Michele Schaecher. Condolences may be expressed to the family online at www.stonacekfuneralchapel.com.

NORFOLK -- Funeral service for William "Ed" Humphrey, 78, of Norfolk will be held at 10:30 a.m., Tuesday, April 30, 2019 at the First United Methodist Church in Norfolk with Rev. Rai Drake officiating. Interment will be at the McCoy Cemetery,... View Obituary & Service Information

The family of William "Ed" Humphrey created this Life Tributes page to make it easy to share your memories.

Send flowers to the Humphrey family.