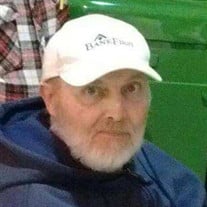 NORFOLK -- Private family service for William "John" Jensen, 74, of Norfolk will be held at Our Savior Lutheran Church in Norfolk. Pastor Eric Gradberg will be officiating the service. Private family inurnment will be held at a later date at the Hillcrest Memorial Park Cemetery, Norfolk. John passed away on Monday, March 21, 2022 at his residence in Norfolk. Stonacek Funeral Chapel in Norfolk is in charge of the arrangements. John was born on August 23, 1947 in Tilden, Nebraska to Delbert M. and Helen Rose (McKenna) Jensen. He attended a rural country school, then graduated from Neligh High School in 1966. He married Donna Sue (Bahn) on June 15, 1969 at Grace Lutheran Church, Neligh. After John’s education, he worked various jobs. He worked at Midwest Plumbing, City of Norfolk water department, meter reader for a gas company, and custodian at Stanton Public Schools. His love was selling cars and operating his own business, Northeast Car and Truck Sales until he retired. He enjoyed collecting stamps, collecting coins, antiques, gardening, and tracking down Model A parts. He was a member of Our Savior Lutheran Church in Norfolk. Survivors include his spouse Donna Jensen of Norfolk, daughter Jennifer Sue Jensen of Rathdrum, Idaho, son Mark Jensen of Hoskins, 3 grandchildren, brother Ed Jensen of Neligh, sister Barb (Gail Hurd) of Neligh, and brother Allen (Sue) Jensen of Norfolk. He was preceded in death by son Michael John Jensen, parents Delbert and Helen Rose. Condolences may be expressed to the family on-line at www.stonacekfuneralchapel.com.

The family of William "John" Jensen created this Life Tributes page to make it easy to share your memories.

Send flowers to the Jensen family.